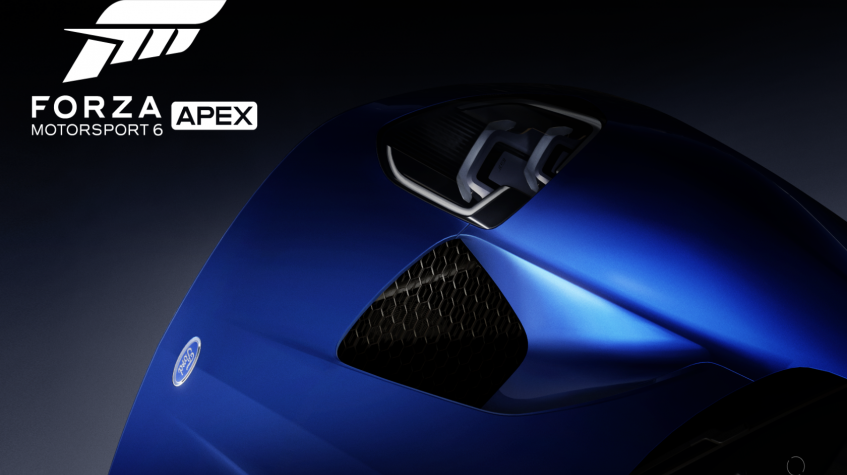 Turn 10 and Microsoft have finally brought their fantastic Forza racing series to PC – Forza Motorsport 6: Apex. Forza Apex, currently in Beta, is a free to play game with the usual optional transactions. Unlike other free to play games there is no paywall to be found. Thankfully, under no circumstances did I feel pressured to shell out any money as I completed the races. If you have played Forza on Xbox, then you know you race for credits. Those credits can in turn be used to buy other cars, not from the online marketplace however, but ones that Turn 10 shipped with the game. DLC and car packs you have to pay for with cold hard cash. With Apex being Free to Play, the economy compared to other Forza titles is quite different. Instead of credits being earned for racing, Apex rewards you with points that convert into coins. You can earn up to three coins per race. To earn all three coins, you need you need to complete all three different challenges Apex presents you with. The challenge of finishing first is always present, but the other two seem to be a mix of skill and assists. For instance, you may be challenged with completing 5 perfect turns during a race as well as turning rewind off, or you may have to lead for at least one lap and have no assist lines on

For you Forza veterans I am betting some of these challenges may be quite simple for you to achieve. I will admit that while I have played every iteration of Forza, I am not the most graceful driver. I have a tendency to use the whole track and then some as well as other cars to buffer my late braking habit. I typically leave the braking line on along with Stability Management and Traction control. I do crank the damage up to simulation to provide a bit of a deterrent but rewind is always there to provide me with the essential do-over. Turning those assists off led to my undoing. Regardless of the number of restarts I just couldn’t get into at least 3rd place. I had to turn a couple assists back on to be able to progress through. However, I now have some incentive to go back and keep trying so I can gather a few more coins. With Forza 6 and all its predecessors I rarely go back to race a race. There is so much content that I just don’t have the time for it. 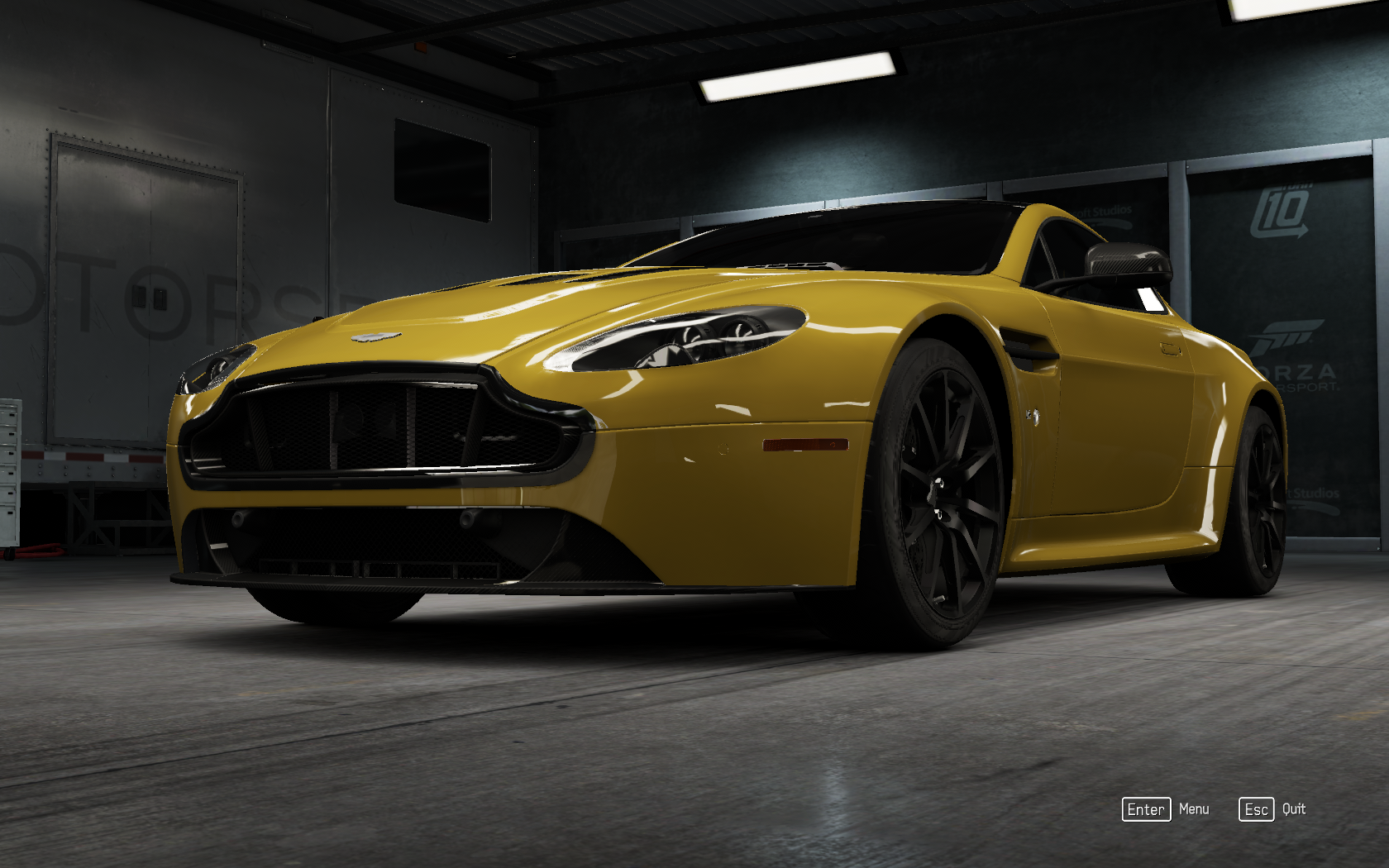 Take 'er for a spin

The content in Apex will be a bit of a sore point for some. There are currently 12 main races along with spotlight races that will open up once you complete the main series. I do feel the need to point out again that Apex is in beta right now and there will be more races in the future. I would also like to point out to those who are complaining…APEX IS FREE. Get over yourselves! If you spent any time with the game you would also realize that more spotlight races are added every week or two. Again…FOR FREE!

Like Forza 6, the spotlight races in Apex are more of a specific focus. As you progress through the main races and the spotlight races you collect the golden coins. The more coins you have the more cars you unlock. If you almost have enough coins to unlock a vehicle you have the option to buy it. Being in Canada those cars were $2.29. In the US they would be $1.99 each. As I noted before I never felt pressure to buy a car. I wanted to buy a car and I almost did but I was only a couple coins shy and I knew I could make those up on the next race.  That being said, each race uses a specific class of cars so the only reason you would need to unlock one (so far) is to go back and replay for a better score and/or more coins. 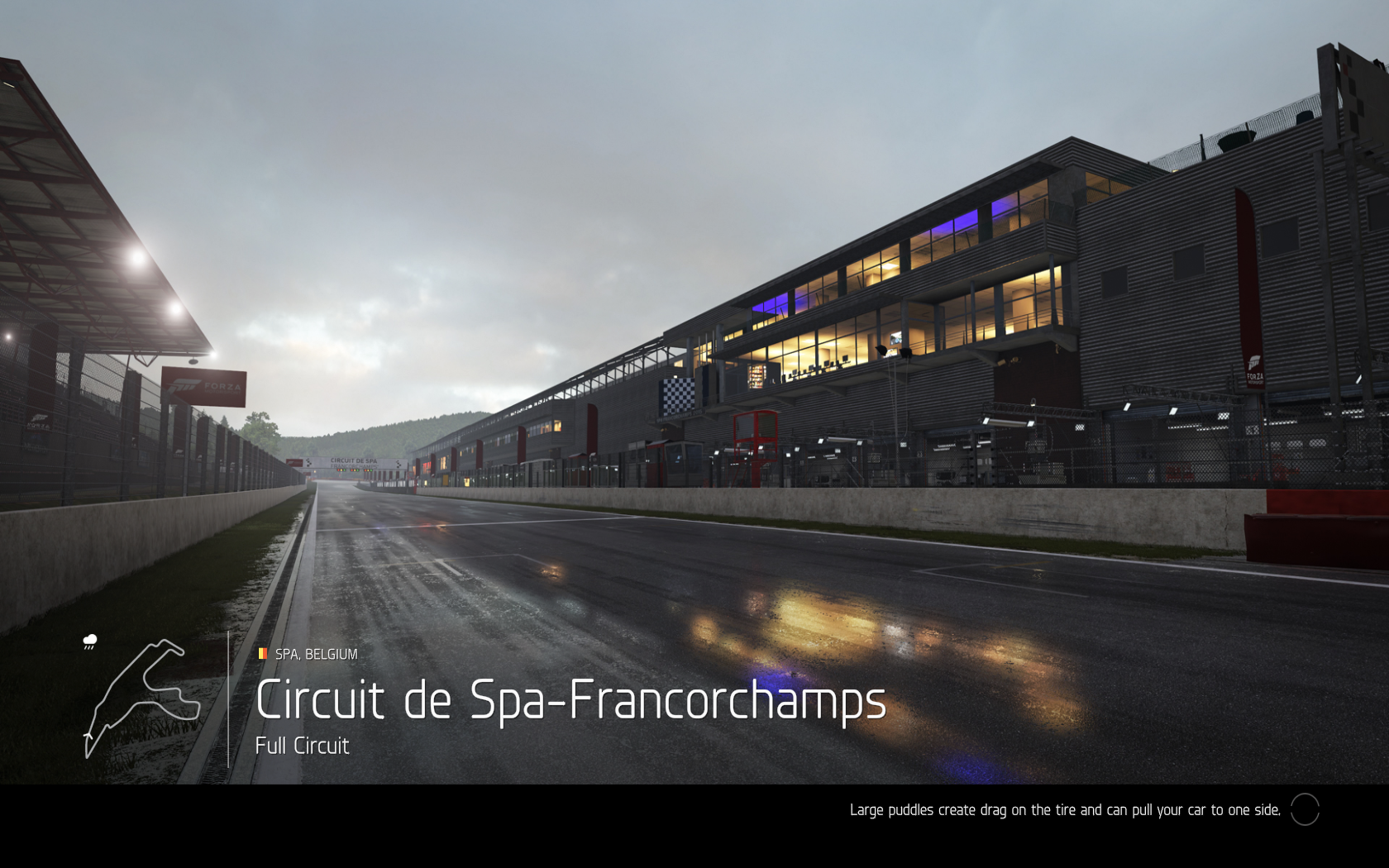 Commit the track to memory

If you have played Forza 6 the tracks presented in Apex will feel very familiar. The details of tracks like Brands Hatch, Sebring, Circuit De Spa Francorchamps, Rio and others are exactly the same in Apex. You play a couple races in the rain and the dark and those too are the same. The puddles induce hydroplaning, your headlights in the dark never seem to reach as far as you need to highlight that next turn and then your heart rate increases exponentially! The rain and dark have other effects as well. The tracks are slippery due to the rain or the lack of sunshine heating up the asphalt. (If you race balls to the wall, I can tell you from experience that in the rain and dark you're gonna have a bad time.)

A new to Apex race was drifting. Unfortunately, this was not in the rain or the dark and I am terrible at drifting. I know what I am supposed to do but with a controller I just suck at it. Maybe Apex sensed that after my first lap full of failed attempts but I managed to squeak in the required number of drifts just before the finish line. Even with the standard Xbox 360 controller on my PC I could feel the bumps on the road and the tires clinging onto the edge of their grip as I tossed the back end of my car around the turn. The feedback and the rumble in the controller have always been fantastic in Forza and Apex is no exception. 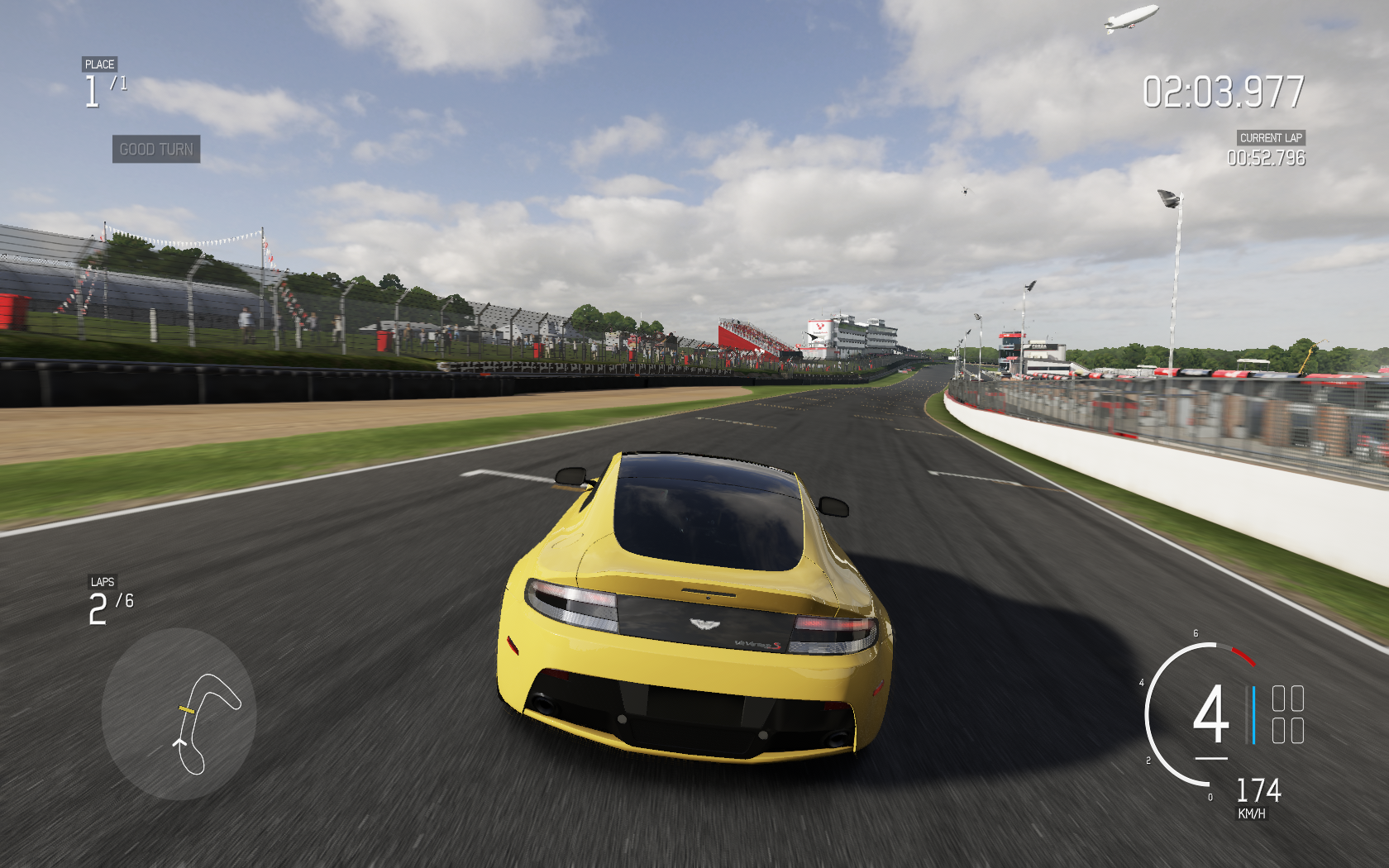 Back on the dyno

Before downloading and installing Apex I had read a lot of negative reviews based on not being able to run or install. The minimum specs of Apex are quite hefty: Win 10 – 64 bit | Core i3-4170 @ 3.7GHz| 8GB ram | Radeon R7 250x or GeForce GT 740. If you plan on running it on your el cheapo laptop you have another think coming. While you may get it to run chances are you will have to dial the graphics way down. This a shame as Forza Apex is, for all intents and purposes, Forza 6 on a PC. ***take screenshots). If it can run smoothly on an Xbox one you would think any PC that comes close to the same specs should be able to handle it fine.

So what am I running Apex on? My rig is not a top end rig. I would say it falls around the high mid range. I am running a Core i5 3570K overclocked to 4.0GHz, water cooled with 16gb of ram and an nVidia GeForce GTX 750TI. The max resolution of my monitor is 1680 x 1050. Not quite 1080p but close enough and it does the trick. I was confident that I would be able to run Apex and run it well. I may have been a little overconfident. 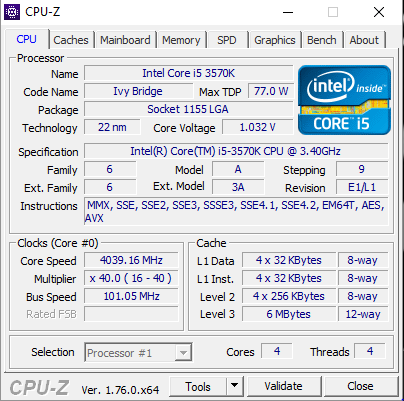 Apex automatically chose the settings for the game. On my machine those settings equated to medium which was a bit disappointing at first. I left it there as overall the game looked quite good and played well to boot. That was until a couple races in when I got caught up in a mix of traffic where I noticed something. I wasn’t sure at first but Apex started to stutter. Not a lot but a couple frames here and there until I managed to break free and be on my own. The effect was annoying but thankfully didn’t get to the point that Apex was unplayable. Given my CPU is OC’d to 4.2 and Apex is installed on my SSD I am going to chalk this one up to my VideoCard. At that point it dashed my dreams of perhaps running Apex on multiple monitors. That didn’t stop me about thinking of going out shopping and I did have a lengthy internal debate as to whether Mrs. Soup would notice a new VC or not. I got so far as putting a GTX960 in my cart before I decided to do some research. From what I found out Apex doesn’t support multi monitor setups which is a bit disappointing but not a deal breaker. I was just hoping that with the extra horsepower my PC afforded my over my Xbox One that I could have run Apex with that kind of setup. I know it can be done on almost every iteration of Forza so far but you actually need 3 Xbox’s networked together each powering its own screen and 3 copies of the game. https://youtu.be/tbPVdQ8EIyg 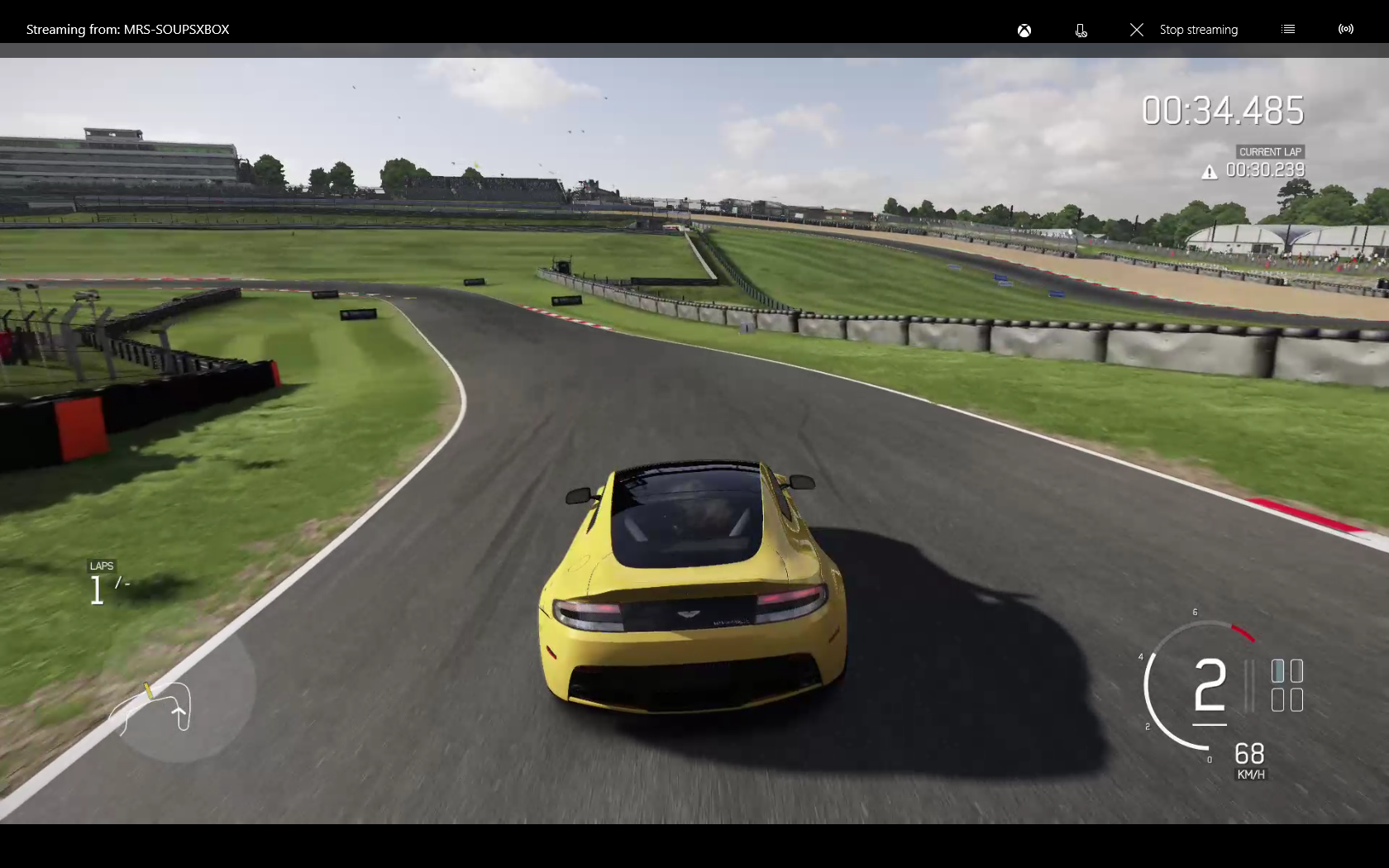 Streaming Forza 6 from an Xbox One 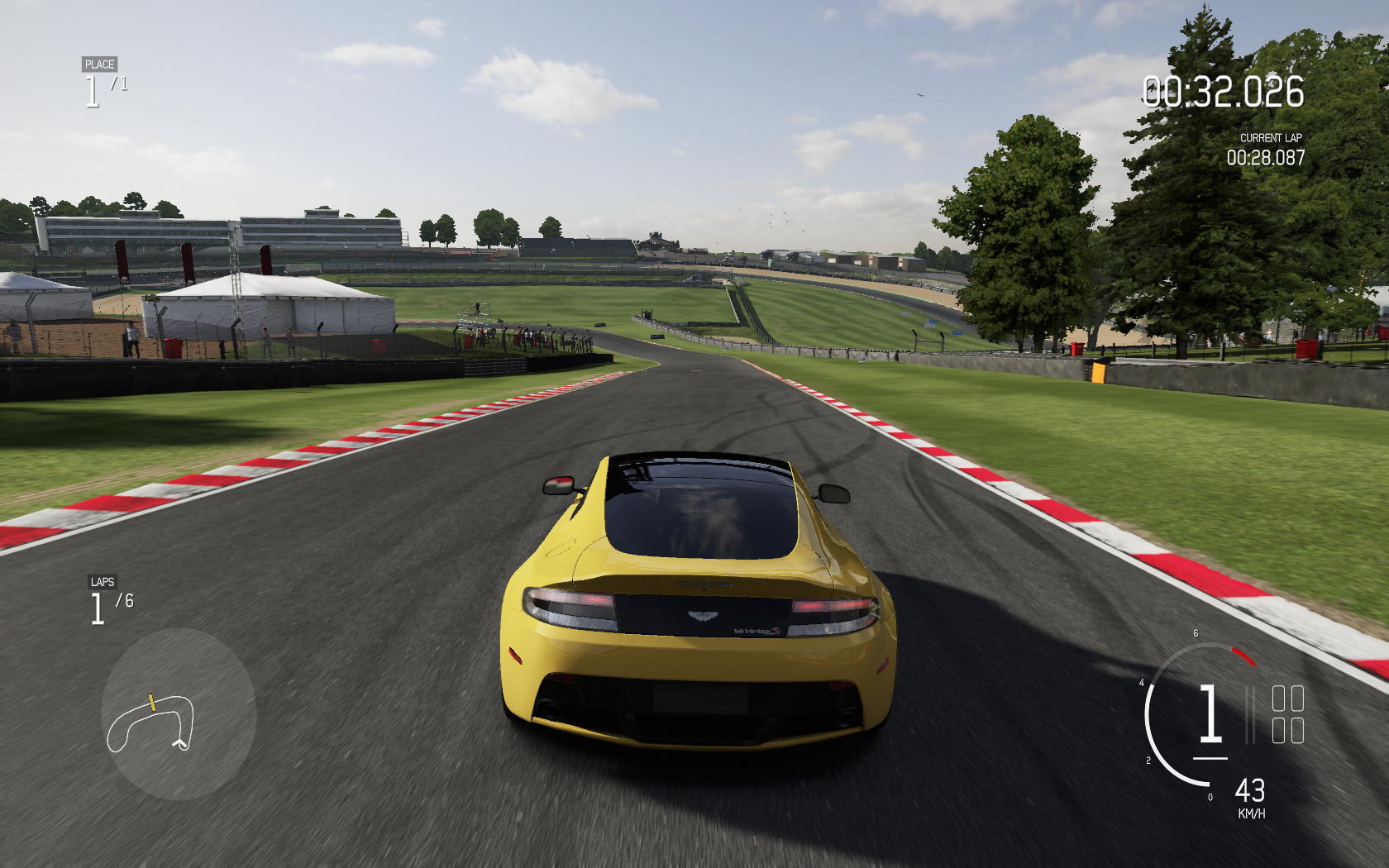 In the end I tweaked a few of the settings and the stuttering was brought down to a point where it pretty much didn’t exist. Sadly, that was at the cost of graphics. There was a negligible difference but I took it almost personally that I had to dial it down in the first place…from medium. That doesn’t deter me from saying that if you have the machine for it and you love racing games you need to pick up Forza Motorsport 6:Apex! If you have an Xbox One and are playing Forza 6, play Apex! If you have never owned an Xbox, play Apex! The game is great, the cars and tracks are just as amazing as Forza 6, Turn 10 is adding new content every couple of weeks and the best part about it is it’s FREE! Yes I know it's in beta but as far as I am concerened that just means Apex can only get better!