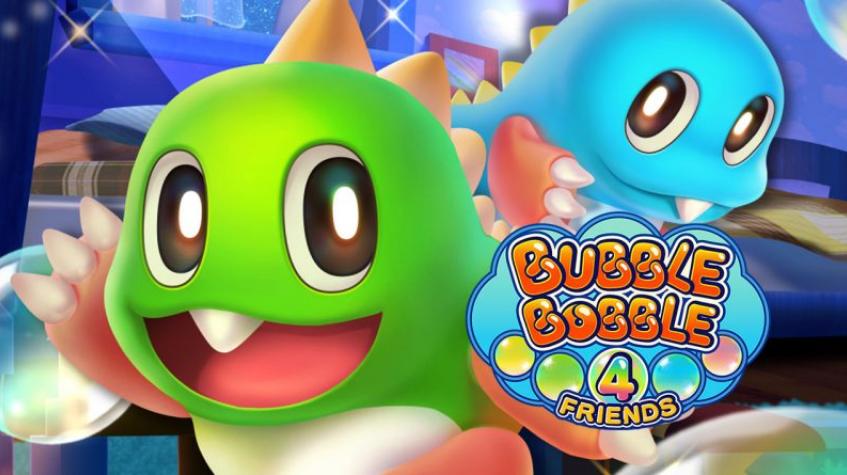 I received an email a couple of weeks back asking if I wanted a review code for Bubble Bobble 4 Friends for the Nintendo Switch. Now, if you are old like me (turning 50 this year) you may have spent a good portion of your pre-teen and teen years in an Arcade. There was an arcade in the strip mall by my high school and when I was done getting my ass handed to me on pretty much every other game out there I would turn to Bubble Bobble to feel a little better about myself. The calming music, the slowly escalating difficulty, the two button gameplay, Bubble Bobble became my game back then and I will always remember it fondly.

Returning to the email I received, well I jumped at the chance but I didn't get my review code entered until after Animal Crossing dropped and my daughter has commandeered the Switch since then. I did manage to wrangle it away for some single player and sat her and Mrs. Soup done for some 3 out 4 player couch co-op.

If you have never played Bubble Bobble the concept is easy, move around the screen, jumping from place to place (I hesitate to call them platforms as they are not always platforms) and you blow bubble to capture the enemies. then you jump on them to pop the bubbles and collect the fruit and or dessert. Once all the enemies are defeated you are onto the next level. Easy right? Well, in both the original arcade game and the single player in Bubble Bobble 4 Friends it starts off that way but, as I noted above, the difficulty ramps up over time. in couch co-op mode it's the same.  Lets dig into each. 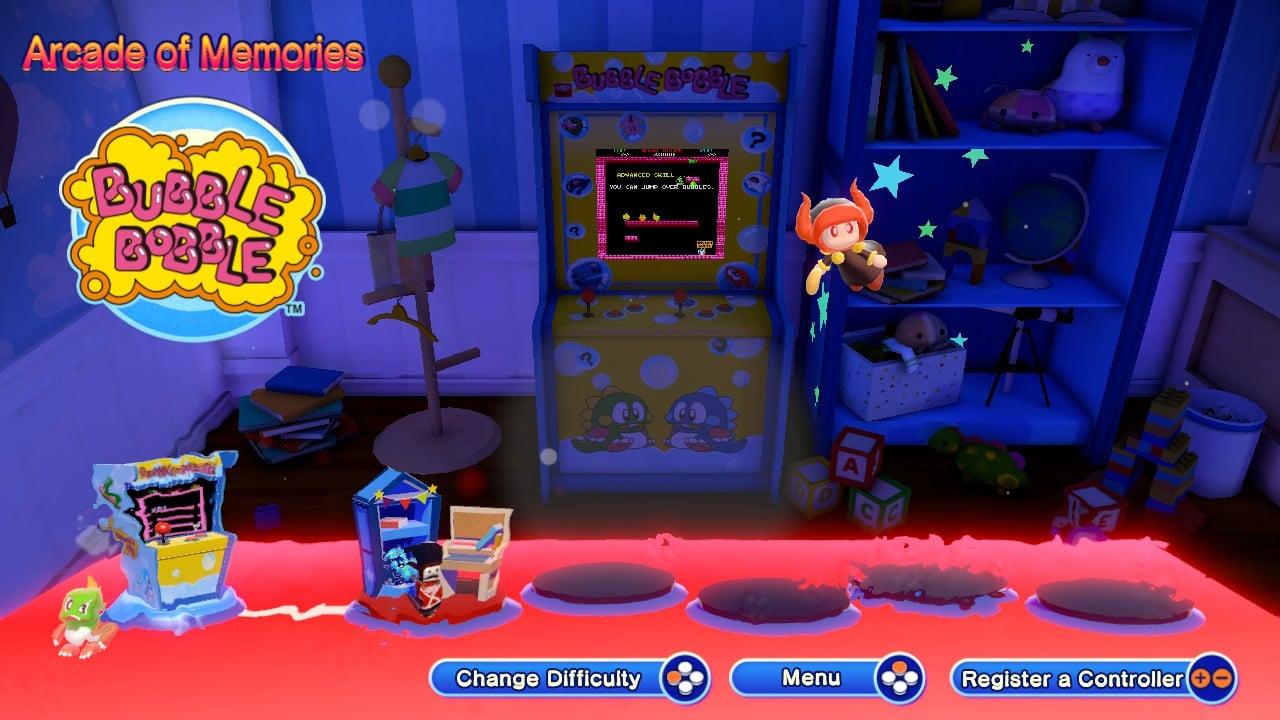 You have three options here for single player. You can fire up the original arcade game as there is a cabinet icon to choose in game and relive the smokey, grimey, don't even want to think about what was in that carpet days of the arcades of old without wasting a quarter. Well, I guess you would have had to buy the game, so there is that sunk cost to contemplate.

The second is the actual single player. I would suggest you actually play the cabinet version first. I am not suggesting this because I am some sort of bizarre Bubble Bobble purist, but I do like to see how far things have come. It will also give you a good idea of what the game is all about. The new single player takes the old arcade game and ramps it up. The levels and "puzzles" in the new single player caught me off guard at the beginning but I really appreciated them as I progressed through. The puzzles and levels were fun and just like the original it wasn't a brutal smack in the face with "your old and your reflexes are old and you suck!" That happened way later on in the game but right from the beginning, the music, the game play, everything was on point.

The original had a bit of character progression if you collected letters and/or powerups and that same mechanic is here as well. The different bubble types are limited in number so be sure to use them wisely.

The third option is the co-op option which you can play by yourself and is more theme based. There are also bosses at the end which I did not always fair well with but then again I never really was good at bosses on any game. There is more variation in these levels and I will say I had a good time soloing through them as well.

Overall the single player aspect of Bubble Bobble 4 Friends is a well made update to the original and at no time did I feel like it strayed too far from the formula I fell for those many years ago. I will say that for the $40USD asking price, I don't know if nostalgia alone would sway me to pick Bubble Bobble 4 Friends up if it was only single player. Luckily, they also added in some couch co-op! 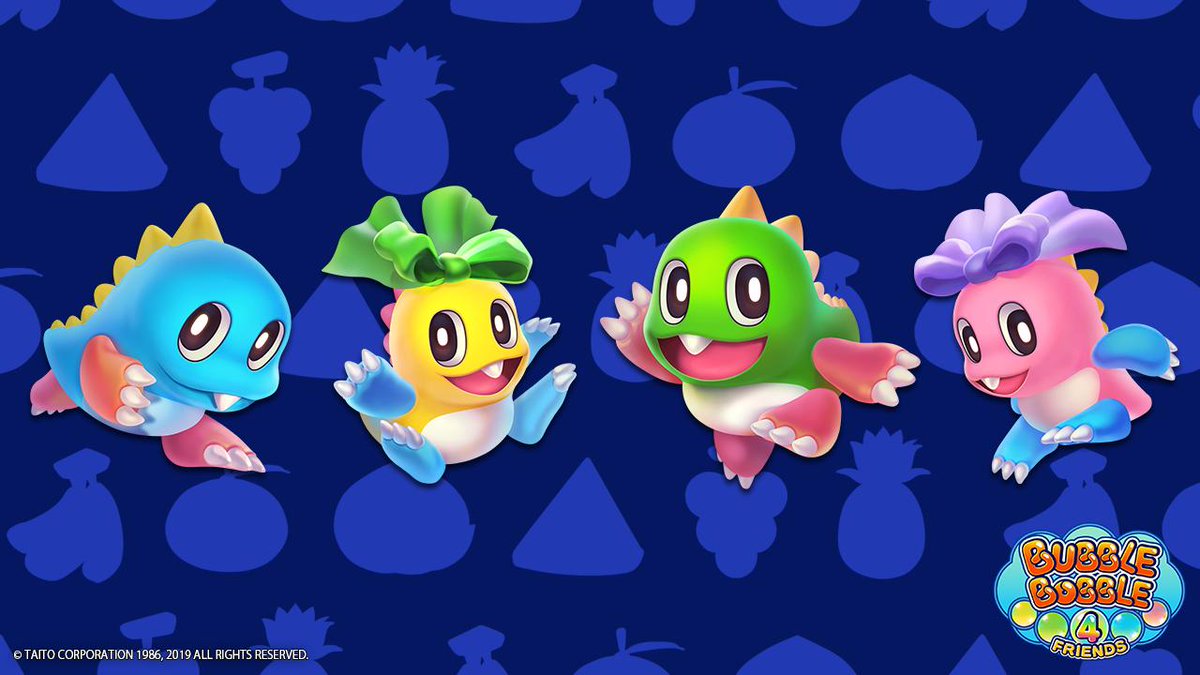 You could play Bubble Bobble back in the day with a friend and when I could convince one of my friends to play with me we had a good time. I convinced my 15 year old daughter and my wife to play with my yesterday afternoon and it was a hoot! There was laughing, there was delightful screaming and the three of us had a lot of fun. We played through a couple of the themes and we survived three bosses before we called it quits. It was enough for me to say that regardless of age, Bubble Bobble 4 Friends has a lot of fun built in.Things did get a little chaotic in all the bubbles and we were not sure who was who a couple of times even though above the player it clearly says who is who. That chaos added to our fun and I did enjoy the saving your fellow player mechanic. If you hit an enemy or an enemy hits you, your little dragon goes into a bubble and one of the other players has a few seconds to come and save you by popping the bubble.

I will say this though, the Joycon by themselves as a full controller kind of suck. I mean they are workable but are by no means a substitute for a real controller. The left hand Joycon actually isn't too bad but the right hand one is just wrong. The thumbstick is all squished over and it's just weird. Why does this matter? it made Bubble Bobble 4 Friends just a little harder to play. When I played the co-op levels as single player I had the full controller and it was a more pleasant experience. I am not knocking the game for this as it's not Bubble Bobble 4 Friends fault, but given it is likely that this is the way it would be played the game would be played in most households I don't think families or friends would play for hours at a time.