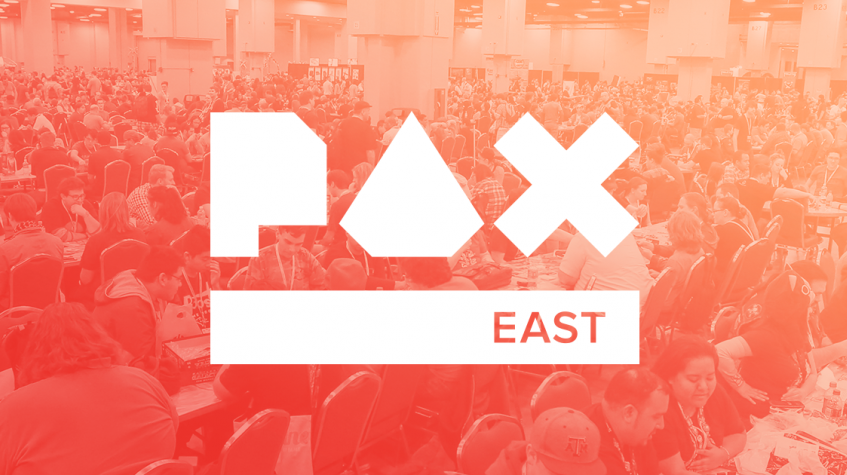 Panels are my favorite part of PAX and after 10 years of attending I’ve seen a lot of them.  Here’s some of the highlights of East 2019 along with photos and links so you can check them out yourself. It's like being a virtual PAX attendee without waiting in all the lines!

This year’s keynote was short and sweet. Arin Hanson of Game Grumps and many other endeavours talked us through his rise into the gaming industry via creating content for youtube. His talk was filled with humor and 4th wall breaking about his speech writing process. The main focus was on how to overcome fear and be able to continue to create and lead. Spoiler alert: His secret antidote is passion for your projects.

I’ve attended all 10 years of the PAX East Q&As and Make-a-Strips and they never get old.  Penny-Arcade “founders” Mike and Jerry never fail to entertain and it flows great now that they’ve switched to questions in envelopes instead of letting people get up to the mic and tell their life story without actually asking any questions.. This year the questions came in a card barge covered in a Market Basket bag. Shout out to local grocery stores! It also featured a Hot Dog fairy trapped in a lantern.

It was a great year for the hot dog fairy who appears every PAX East to be part of the comic drawn in Make-A-Strip. This year the fairy was held hostage from the comic for charity donations. Mike set a target of $4000 when all of a sudden a single person gave a $10,000 donation to Child’s Play. They had staff go make sure it was real and not a donatio ticker glitch. Woohoo for gamers helping out lots of children’s hospitals and saving the hot dog fairy!

JackBox is always a good time.  The game is fun at home with friends and family but even better with funny folks who kick ass at improv and comedy.  Having over 1000 people in the audience also makes voting interesting. This year’s panelists were:

This year the two game selections were from JackBox Party Pack 5: Patently Stupid and Mad Verse City.  Patently Stupid is great when folks are doing their pitches but takes a bit to get started as players get in all their answers. Robot rap battles were epic but there was an epic fail between rounds of the audience getting to tap on their phones to blow up buildings in Mad Verse City.

Bonus announcement at the end of the panel: Trivia Murder Party 2 will be in the JackBox 6 this fall! https://youtu.be/0-cU8tyQyWM

I feel like it was a missed opportunity not to call this The Business *end* of Butt Jokes. This great panel featured Rob DeBleyker of Cynide & Happiness, Tom Dyke from Cards Against Humanity, Maya Coleman from Secret Hitler and Trogdor the board game, Graham Stark from LoadingReadyRun, and your host Trin Garritano from Kickstarter and the Friendshipping podcast. There were surprisingly few actual butt jokes but lots of funny anecdotes about cool projects folks have worked on.  I enjoyed hearing some behind the scenes info on that time Cards Against Humanity dug a hole in the ground for black Friday. 90s nerd nostalgia kicked in hearing Maya describe working with the Brothers Chaps on the Trogdor board game.

We Made a Bot Watch 1000 PAX Panels, And It’s Moderating This One

Two PAXes ago an AI bot made his panel debut. Now he’s evolved and learned even more in his hunger to devour PAX knowledge.  He had a great cast of funny folks to help him out:

AI Bot Merrill-Grambell (who you can add on LinkedIn for ALL the endorsements) moderated with a series of questions for each panelist.  I think my favorite part was his pronunciation of CAROWL (second only to how Rick Grimes pronounces it on AMC’s The Walking Dead).

Merril asked some thoughtful questions, had a few glitches but all and all was one of the best moderators I’ve seen at PAX to keep the conversation interesting.  He also had some tricks up his sleeve taking us to meeting his AI friend Garf and recreating an episode of Frasier with some new cartoon friends.

The league of heels panel makes me relive the childhood wrestling memories I never actually had! It’s an amazing homage to all things 90s wrestling. They even have a sick 90s fan made website chronicling all that matches that looks straight outta Geocities.

This year’s saga had a whole backstory with seized yachts and undercover cops. And for a shocking change they actually played a full wrestling video game for real until someone actually won! Spoiler Alert: Kudos to “The Producer” Rich Gallop for eliminating a record 16 other players. The field had almost 40 contenders (depending on if you count “dogs” and totally *not* Pikachus) that battled on Nintendo 64’s Wrestlemania 2000. The game has a great cast of characters including Mr. Ass, The Rock, and Chyna who got lots of stage and crowd shout outs for her hall of fame induction! Always a funny time with a great cast of real life and video game characters.