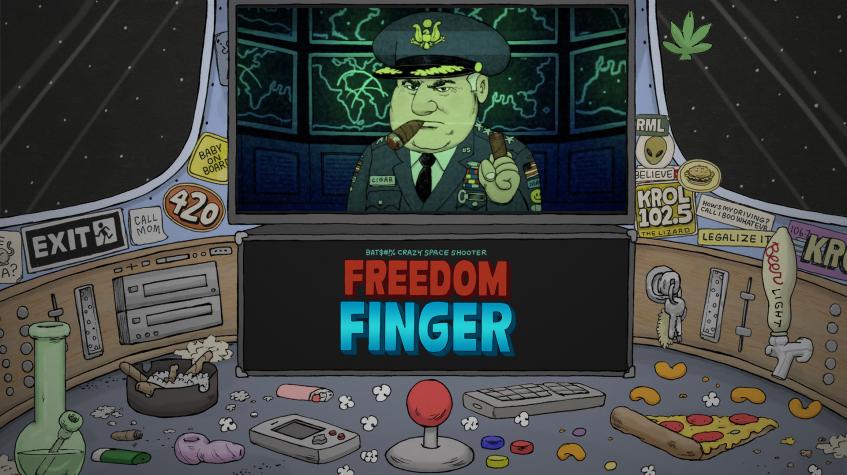 As a media badge holder you get a literal butt ton of press releases in the weeks leading up to PAX East.  There were two games on my must see list to check at at PAX East this year: Killer Queen Black and Freedom Finger. Here’s a run down of my hands on time with them.

The only game I decided was “appointment worthy” was Killer Queen since I had heard it that it was this sweet very limited run arcade team based head to head cabinet game. There’s are only around 100 cabinet pairs in the wild and more than half of them are in private locations.  A few summers ago I went to Abari in North Carolina and there was a Killer Queen cabinet but it was occupied the whole time I was there so I didn’t play. I had regrets so hence my appointment and hype to friends to come play the game with me on the floor.

Except I should have read the press release more closely because what was being shown at PAX was not in fact the multi-team arcade cabinets. Instead now the fun of that is coming to consoles near you.  Thankfully it’s still an interesting game even without the whole you have to play in the meatspace requirement.

Killer Queen Black is a 4v4 (cabinet was 5v5) team battle game coming soon to Switch, PC, and XBone with cross platform play. You’ll notice Sony is currently absent from the list of platforms since they still  haven’t learned how to cross play nice with others…

The game play is a cross between the original Super Mario Bros and Joust with lots strategy elements thrown in. One player is the queen while the rest of the team plays as workers. It’s team versus team with three very different ways to win: be the first to kill the other team’s queen, race a snail across a goal, or collect berries.

I brought my husband and two friends to the appointment as my team. None of us are big platform or strategy/tactics games players and that was evident quickly as we had our as$es handed to us every game we played. Since all the workers look the same I had trouble figuring out where the heck I was every time I respawned.  It was fun and frantic trying to get the hang out the game though and the 80s metal sound track is pretty sweet.

Killer Queen Black will feature online multiplayer and lets you either bring your own team or will match you up with one.  There’s local wireless multiplayer on Switch. Console brings new play options for quick match, ranked, and custom games as well as new weapons.

Indies are my jam when it comes to video games so the Mega/Mini booth is always my first stop for early floor access.  The press release for Freedom Finger hooked me with the trailer showcasing old school side scrolling shooter game play and provocative hand drawn art. The dev team was super friendly and set me up for hands on demo.

This side scrolling SHUMP (See I not only learned a new word, I keep getting to use it in sentences) or more like Punch ‘em up (PHUMP?) adds an additional element where the music is important to game play. It will aid you in getting power ups and boss battles as game play is synched to the soundtrack. The soundtrack stands out on its own showcasing an impressive list of bands.

There’s also an amazing cast of voice actors including Nolan North (famous for voices in the Marvel Zen pinball games and maybe other stuff I don’t play! :p), John DiMaggio (Bender!), Eric Bauza (all the cartoons!) and Sam Riegel (all the video games and cartoons!). Freedom Finger has awesome hand drawn art and the plot takes satirical aim at controversial issues like communism, weed, and video game tropes. Their booth swag spoke  to my inner 90s nerd when they handed me an underground zine about the game.

I was not properly caffeinated for the press hour so my video game skillz were even worse than normal. I did somehow bungle my way through the first level without realizing you could catch and throw things back at the enemies instead of just shooting as a game mechanic. The art flying around is hilarious. I didn’t want to miss all the jokes is my other excuse for playing terribly so it should be a fun game to watch other play on Twitch!  Thankfully for me there are a range of difficulty options so I should be able to muddle my way through the 36 levels when the game actually comes out. Definitely check this one when it’s available!

You can check out the trailer here https://www.youtube.com/watch?v=hldldMBFIYQ