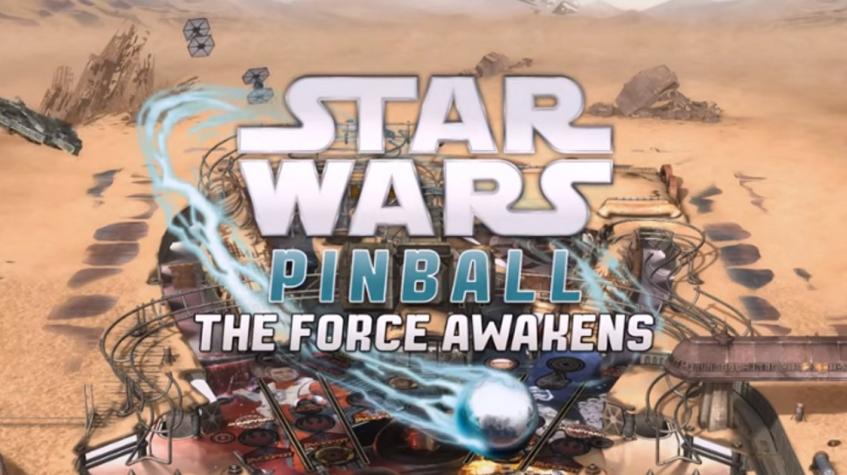 I have followed the Zen Studios Star Wars table releases and consequently, purchased all of their other Star Wars packs. I also own a couple of their Marvel tables, but I do not play those as often. I’d like to thank Tiffany for the opportunity to write this review and to thank Zen Studios for providing me with a review copy of the new "Star Wars(TM) Pinball: The Force Awakens” and "Star Wars(TM) Pinball: Might of the First Order” tables that were released the week of Jan 12, 2016.

First and foremost, I am a Star Wars fan boy. Star Wars has been in my life (in some way) for as long as I can remember. Secondly: I am an average pinball game player. I think I may have missed out on the pinball gene, because my propensity to get the ball into the far left and right lanes is quite impressive...most impressive. I think I lose the ball more to those lanes than I do to the bottom center gap between the main flippers. Now that’s talent, right?! RIGHT?!?

This past weekend, I played the tables on XBOX ONE for about 6 hours total. I wanted to take plenty of time to explore them and to score enough where I wouldn’t be embarrassed to admit them. Full disclosure: as of this review, my scores are just a bit over 27,000,000 for each table. Many times during those first couple of hours, I had no clue what I was doing. But then the pieces started falling into place and I started understanding what needed to be done. If I could just keep the ball out of those far left and right lanes, I’d be fine! 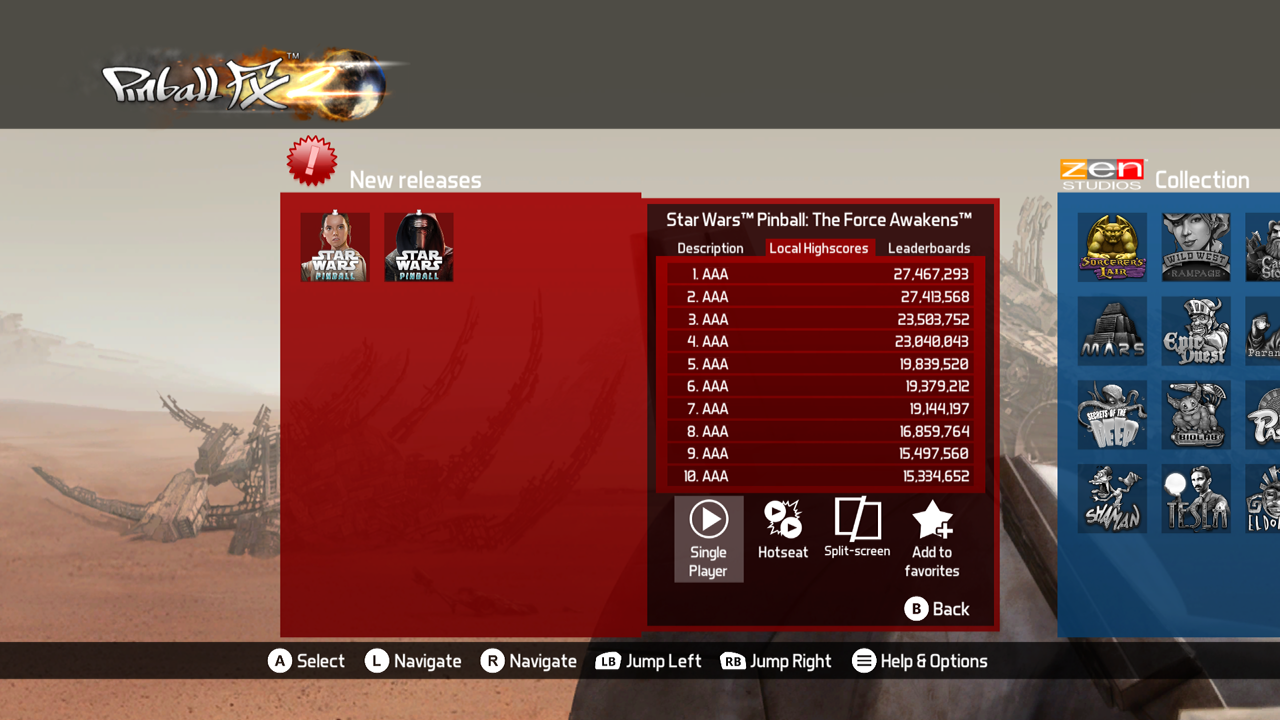 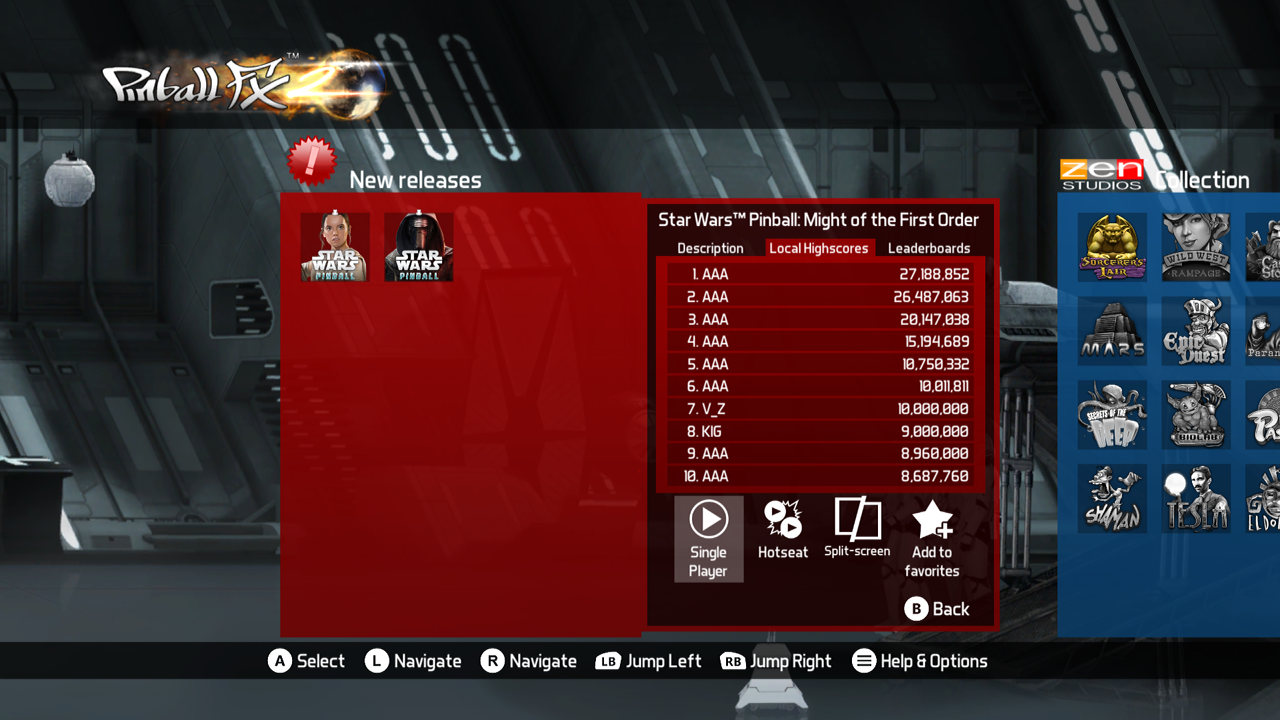 Both tables have a number of modes and story missions, which is consistent with their other Star Wars tables. I still haven’t played through all of them yet, but that’s ok! As I return to them, I want to keep discovering new features because it helps keep them interesting. Even when I didn’t perform very well, I tended to jump right back into the game to “prove” to myself that I could do better. I didn’t want to walk away from the tables because of failures. 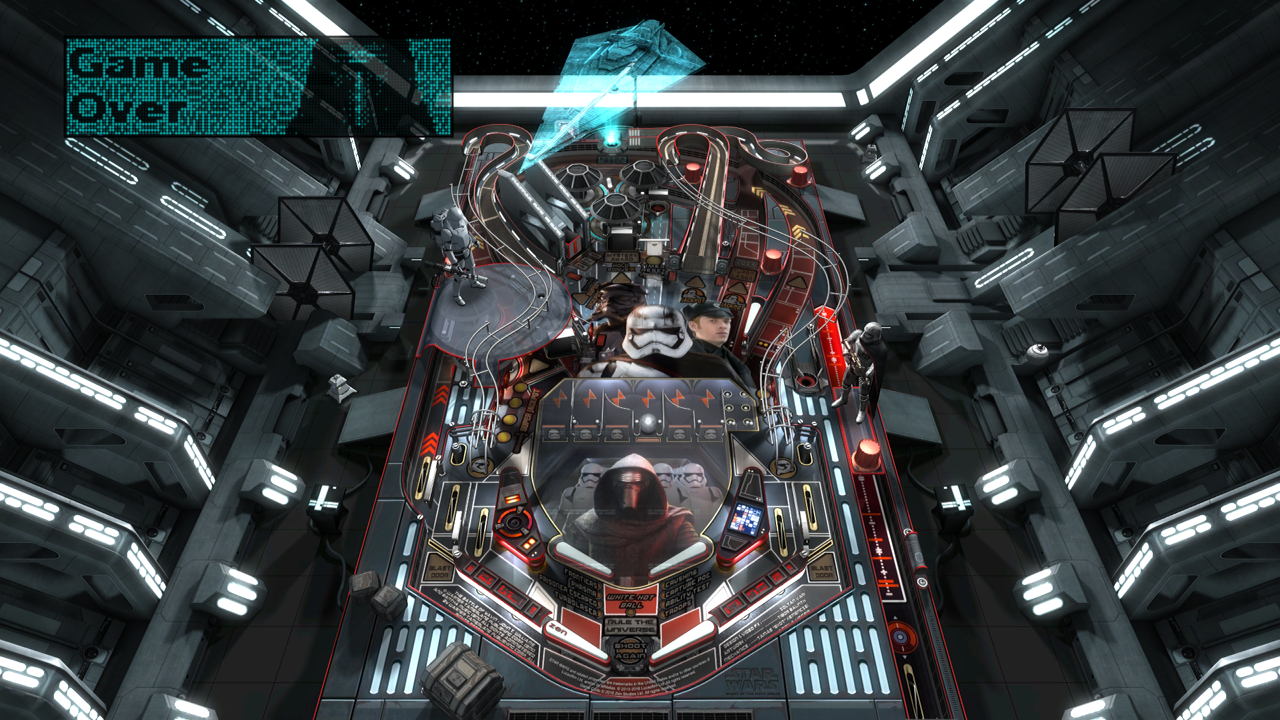 From a table's Main Menu, there is a “Table Guide" that walks you through the various mode triggers and requirements. I only briefly scanned through the guides, since I prefer solving the triggers and events myself. They seemed pretty comprehensive in the little bit of time I looked them over. 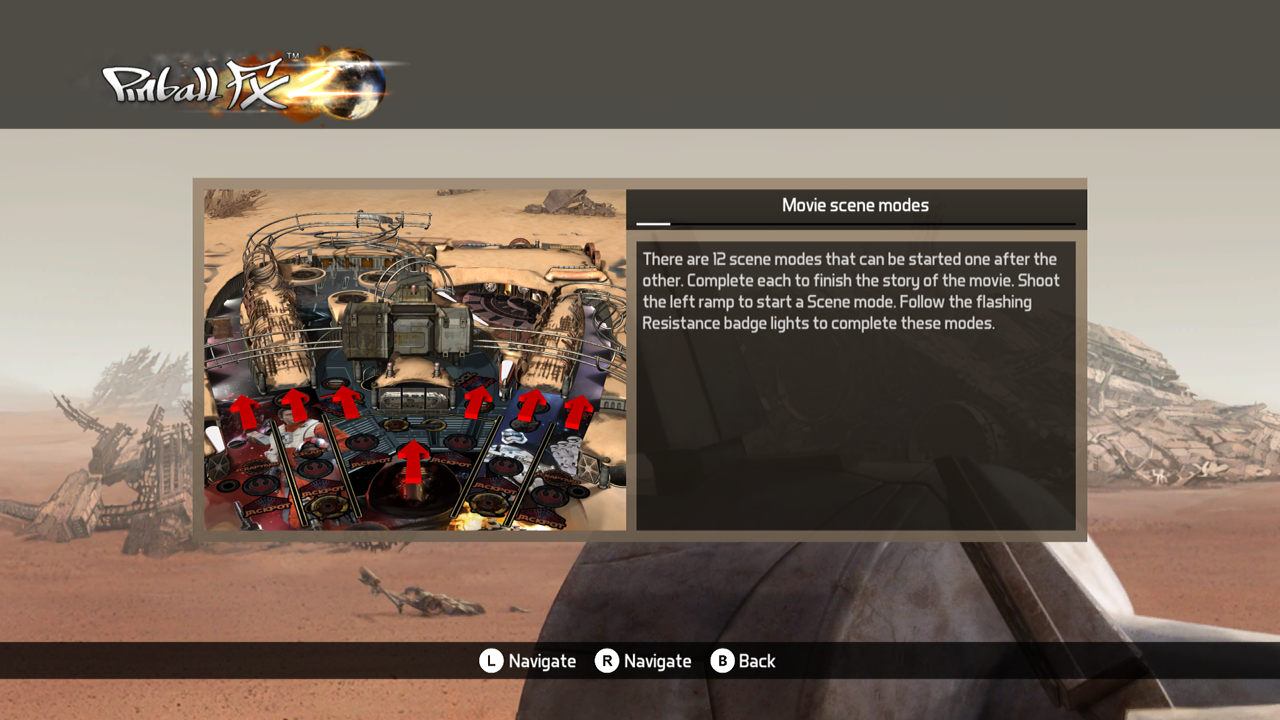 An interesting feature that I hadn’t looked at until this review is the “Operators Menu”. This is a place where you can play with various aspects of the tables such as: testing lamps, flashers, sound effects, consulting statistics, customizing the table pitch and bumper response . Caveat: if you set any adjustments outside of “Factory" settings, it won’t allow you to participate in the leader scoreboards. This is understandable, since you could set the table to “Easy" and blow away your friends who are playing on a table set to the “Factory" settings. However, easing off the difficulty would be a good way to get some practice on the table to figure out the various triggers and modes that are available. 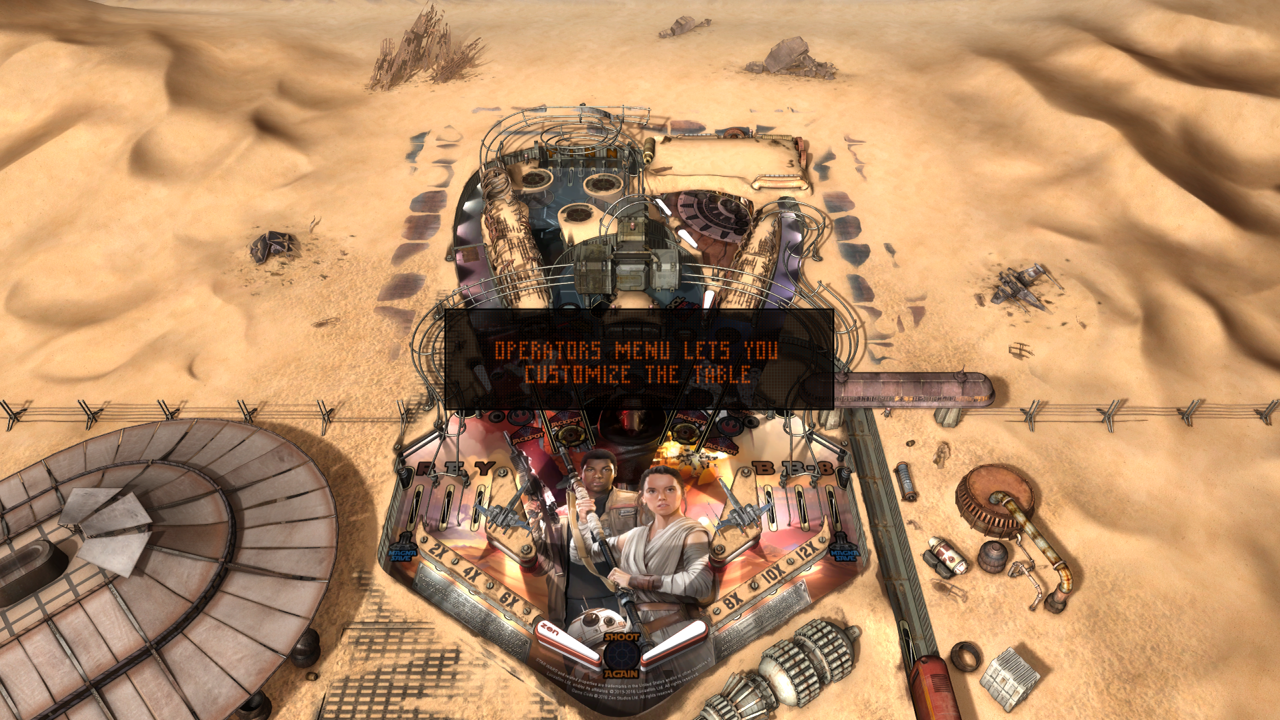 While the character likenesses were really well done, the table art itself made it a little more difficult to follow the ball around the table. I’m not sure if it was the combination of the art and how crowded that table starts to feel once you get to the ramp entrances about halfway up the table, but it felt a little too busy. 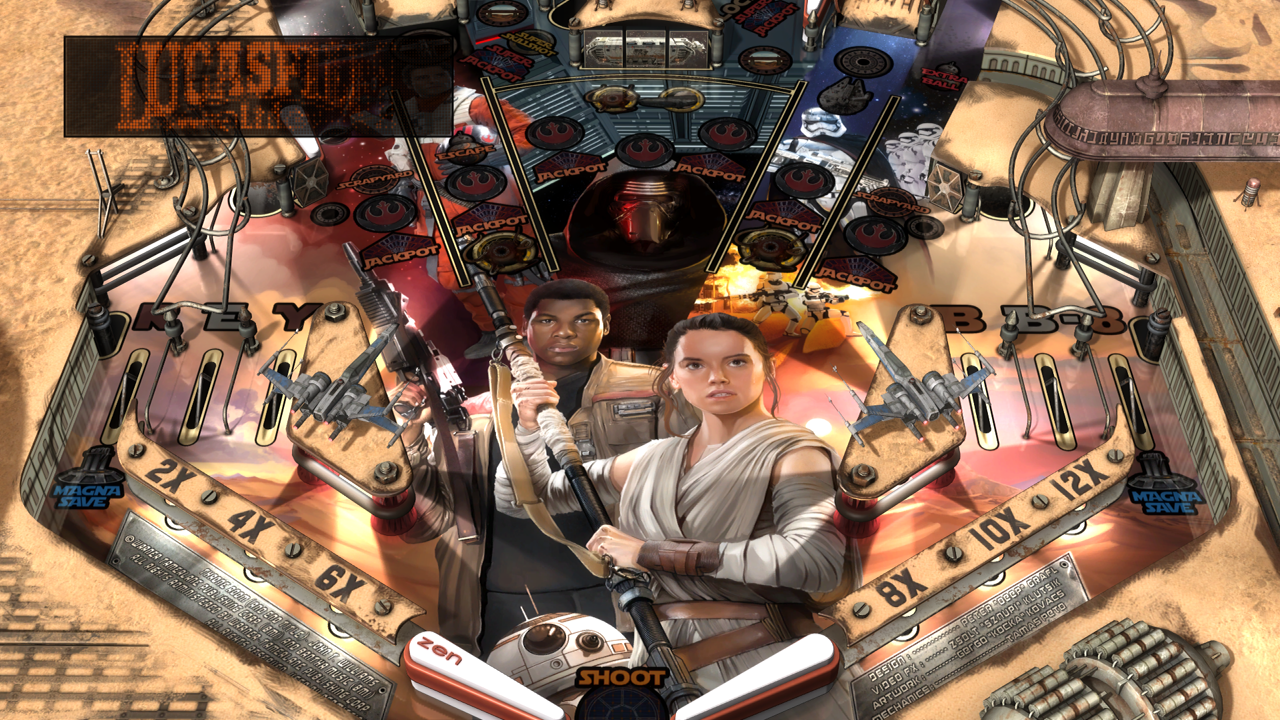 The music is “The Throne Room” from “Star Wars” (a.k.a.“A New Hope” ), and not from “The Force Awakens”.  I’m surprised they didn’t incorporate something like "Rey’s Theme" into this table, since it was based on Jakku. I assume it was not used because of limits imposed by their licensing agreement with Lucasfilm, but c’mon, we have an entirely new film’s worth of John Williams music! Utilize it! 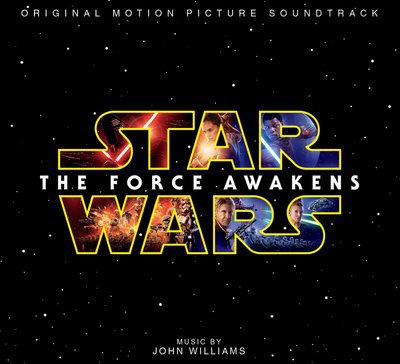 This table has a lot of elements which send the ball back at you VERY quickly. On a number of occasions, after completing a triggered mode, like the freighter, the ball came back faster than anticipated and I ended up losing the ball. Stay alert! I would also find myself trying really hard to get the ball into a ramp other than the center loop, but found it would always just hit the bumpers between the entrances and come screaming back at me. Yes, I realize that’s the point, but it didn’t make it any less frustrating at times. I think I prefer tables that have a little more open space and not just a bunch of ramp entrances lined up in a row. 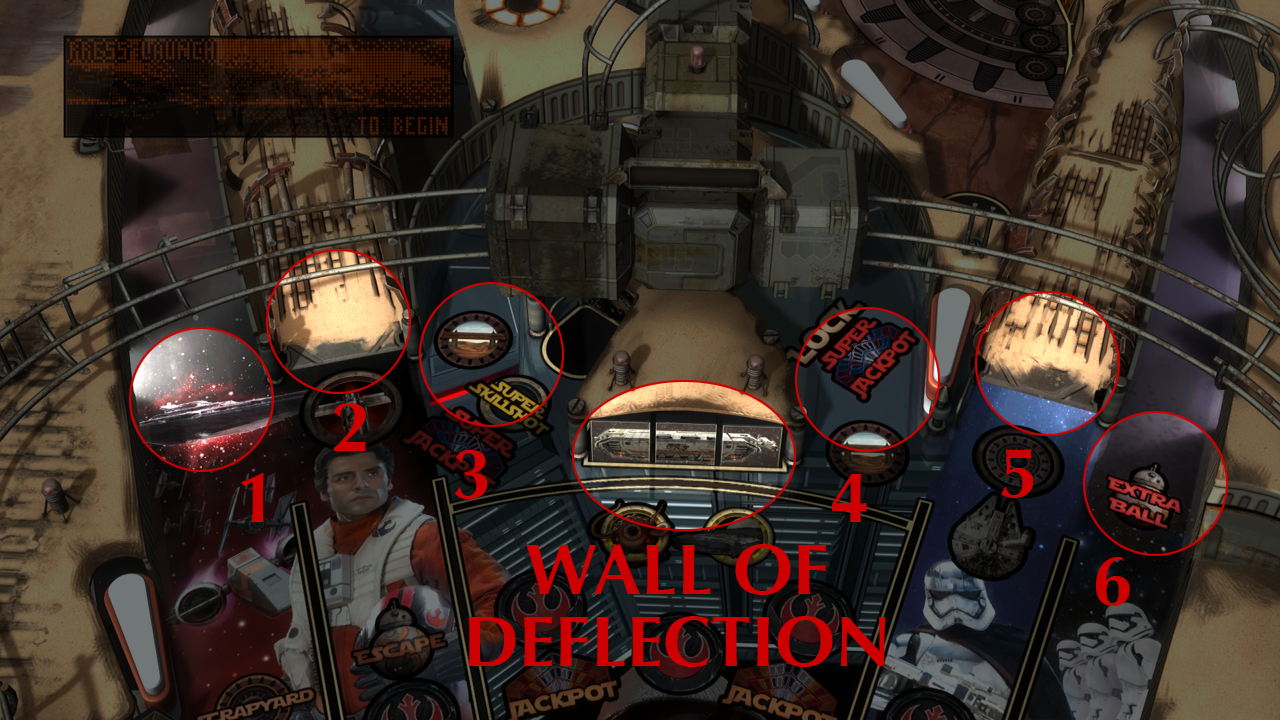 Some things I liked:

One detail that I really liked was their use of Rey’s speeder as the ball launch mechanism. If you don’t launch immediately, you can hear the engine revving, which is a nice touch. I also felt like the voices of the characters sounded pretty close to the actors who portrayed them in the film. 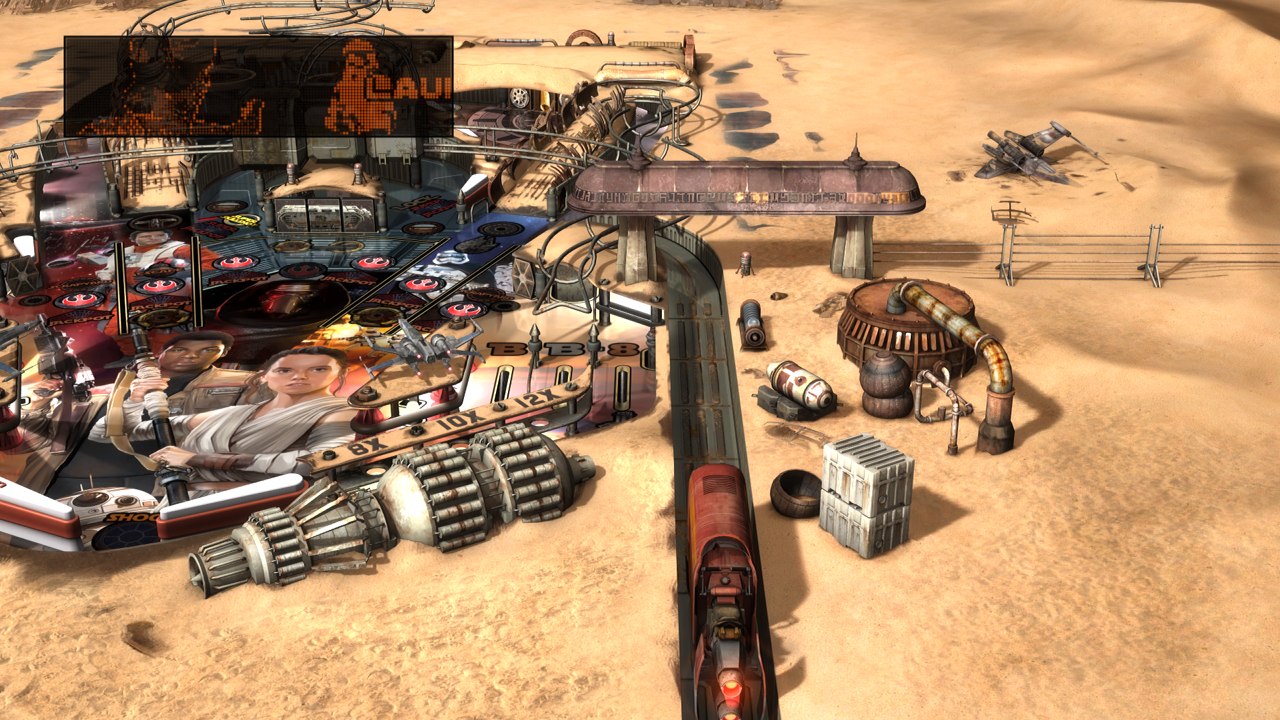 There are multiple levels of skill shots available when you first launch the ball. A couple of them seem a little easier to hit than on other tables I’ve played. I’ve scored 12,000,000 in one game just getting skill shots. The one skill shot I tend to get is when the ball comes around the table after initial launch, and as it passes by the upper left flipper, knock it into a hole above and to the right to nab 2,000,000 the first ball, 4,000,000 the second ball and 6,000,000 the third ball. 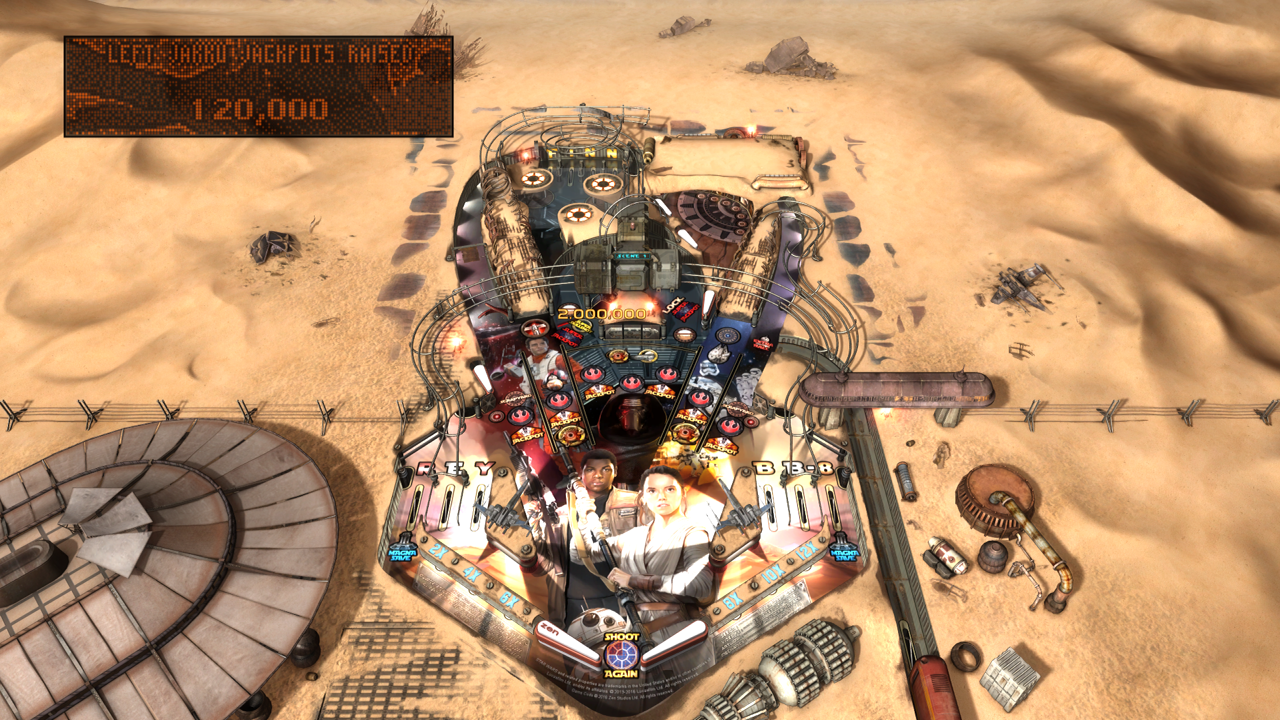 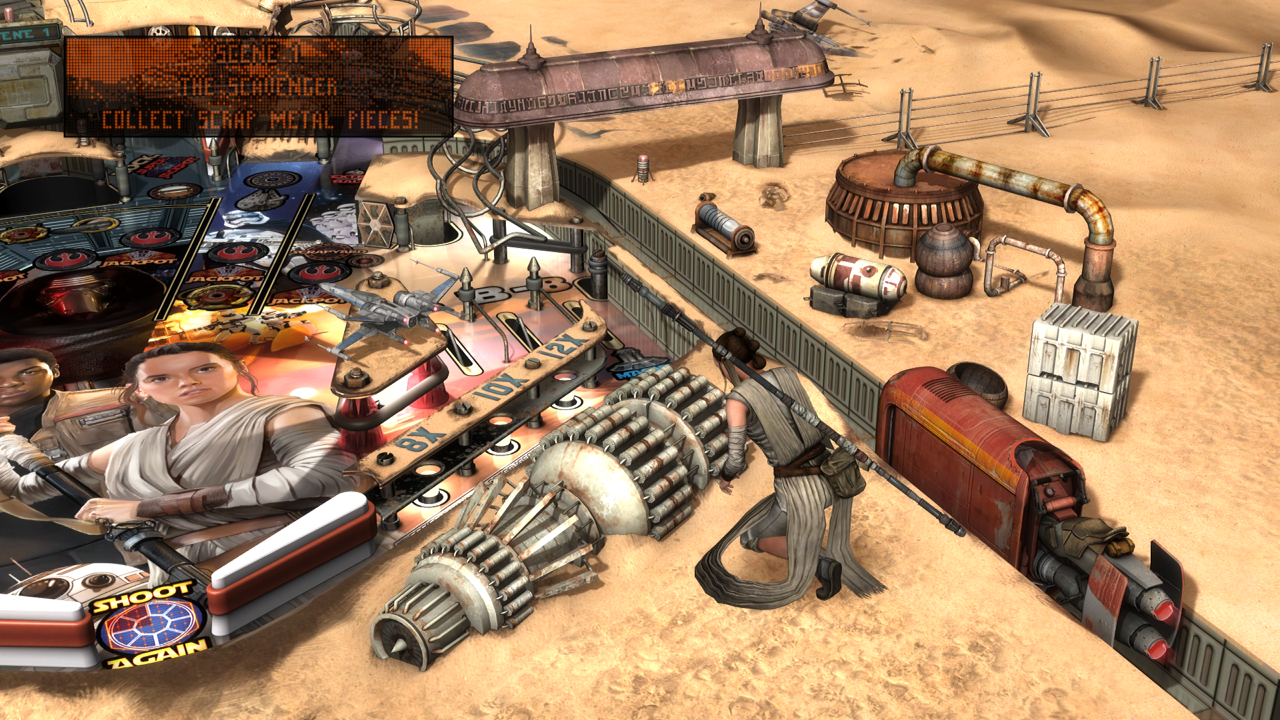 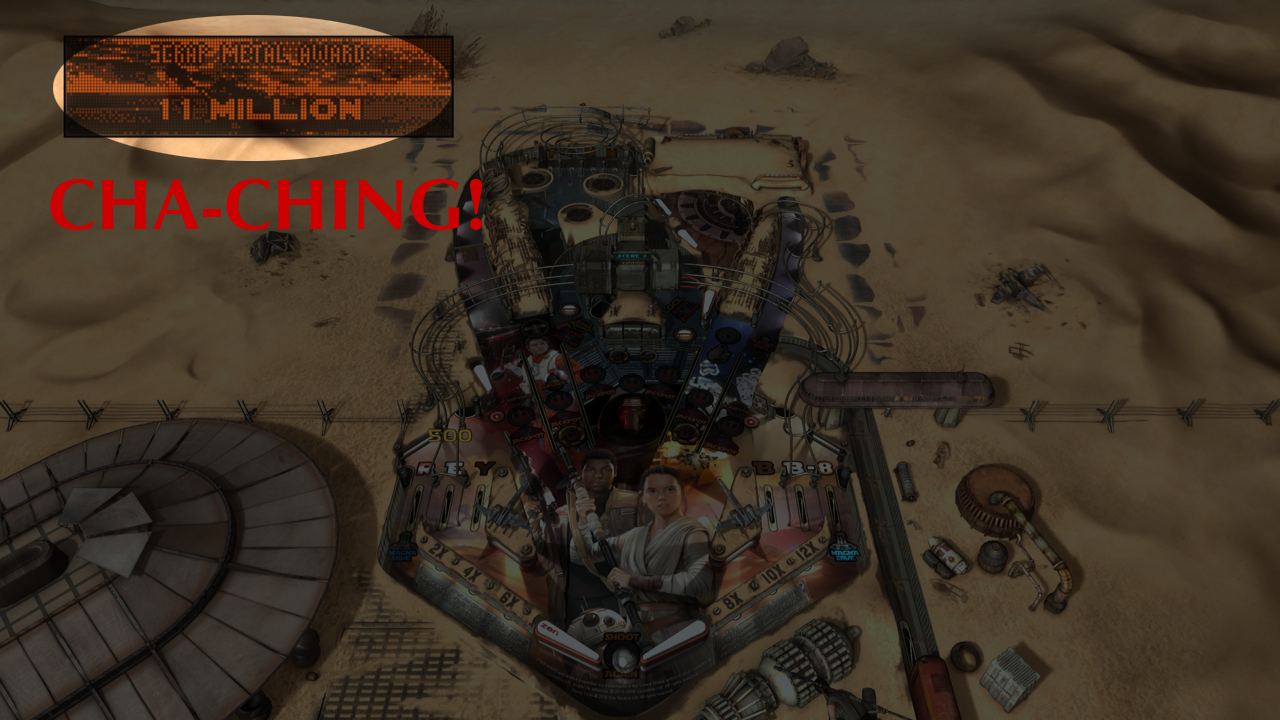 I really appreciated the use of the “scrap” elements to form some of the ramps and the textures in the sand. The details throughout in the table was really well done, even down to the rust on the metallic rails to make them feel like they aged right alongside the imperial junk lying about. 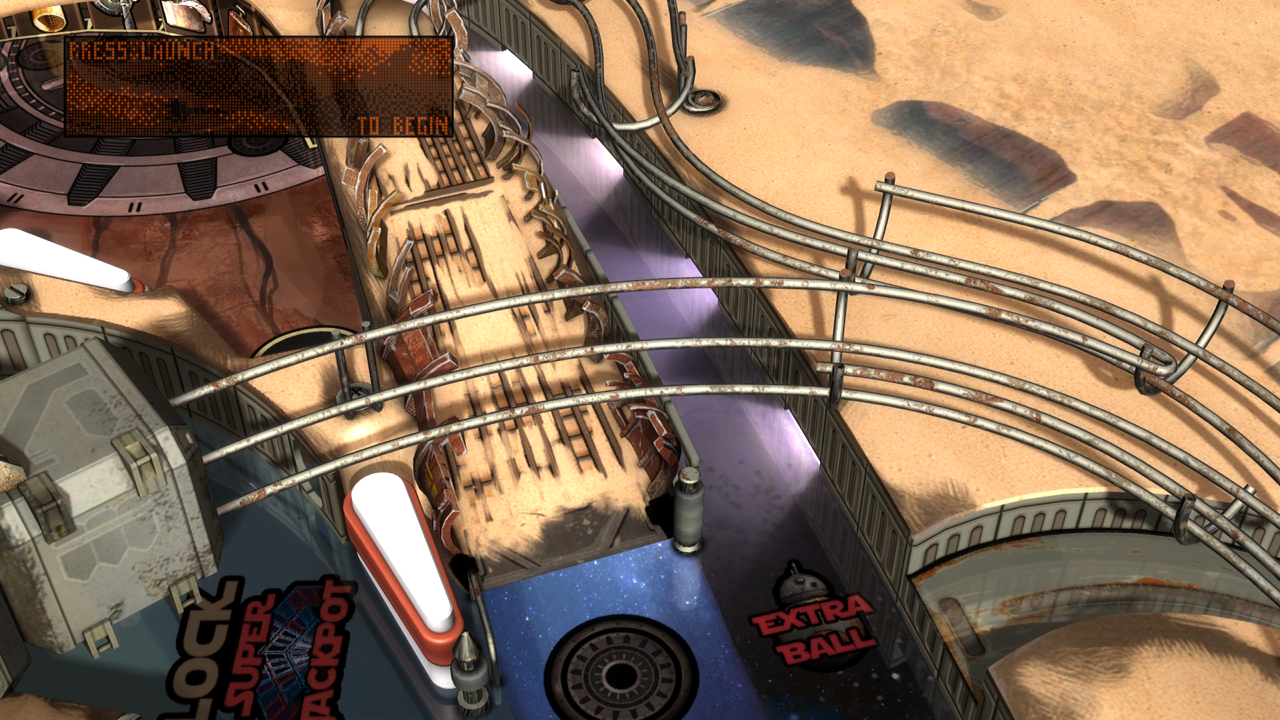 Other modes I have also played through are the freighter, monster, multi-ball and BB-8 escape modes. Of the four, the freighter mode has been the most lucrative, from a points standpoint. All in all, this is a fun, but sometimes frustrating, table because of the way the table is laid out. I touched on this in the “Some things I didn’t like” section above. You’re essentially faced with 6 ramp entrances about halfway up the table and a solid wall in the middle that sends the ball right back at you when you hit it. I’m sure over time, I’ll get better at it. 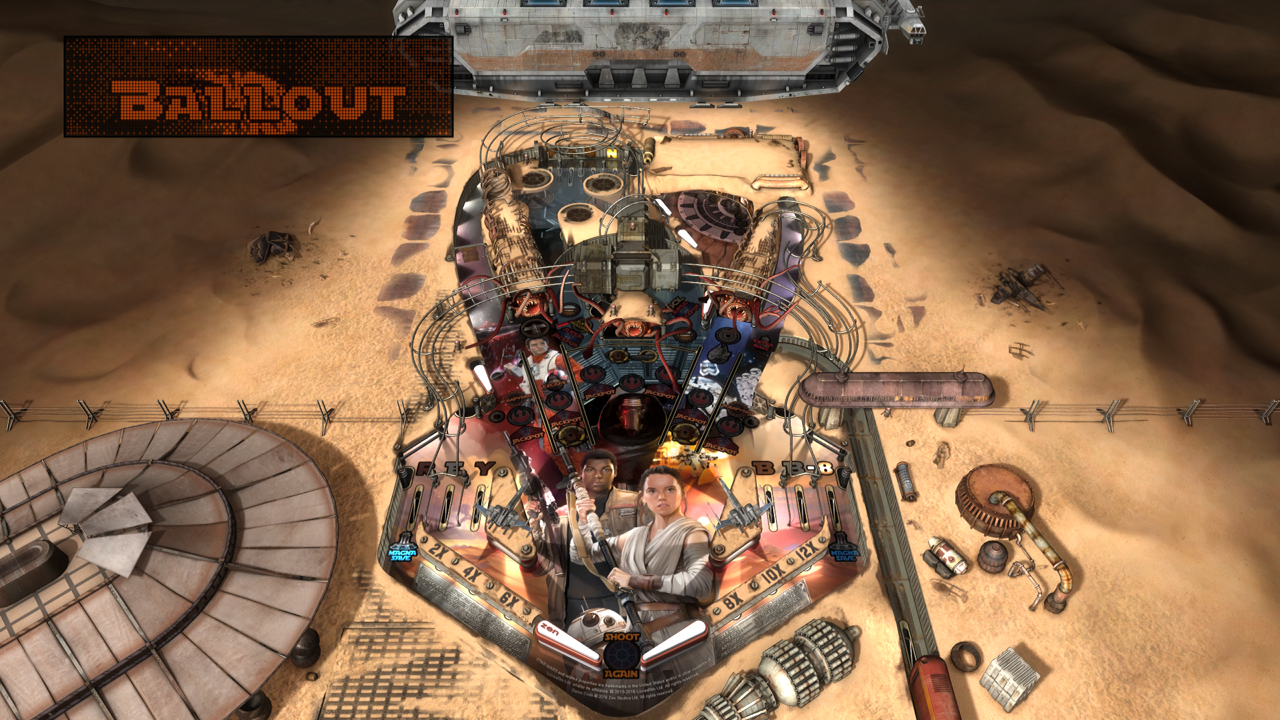 I’ve only seen one story mission all the way through, which is “Capture Poe”. It seems like you get a lot less time to complete tasks on this table compared to the Jakku table. It seems that if you trigger the spinner in the top center of the table, it will reset the timer for the current task. 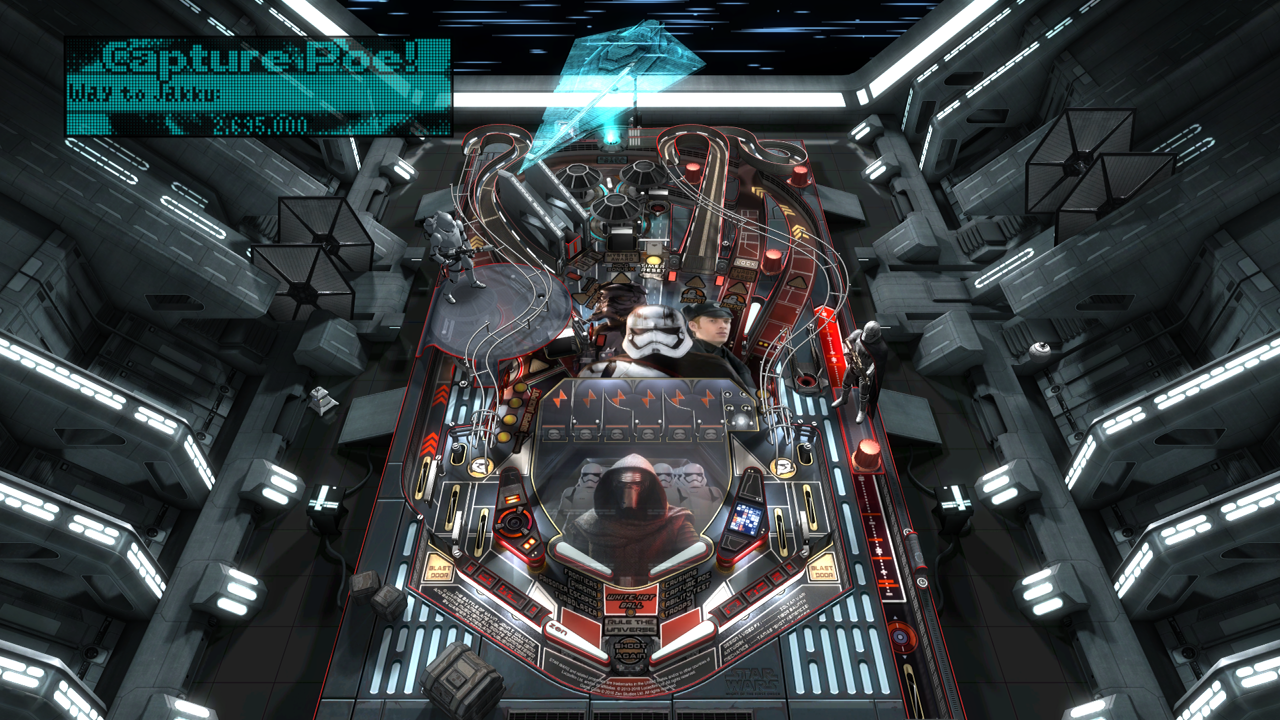 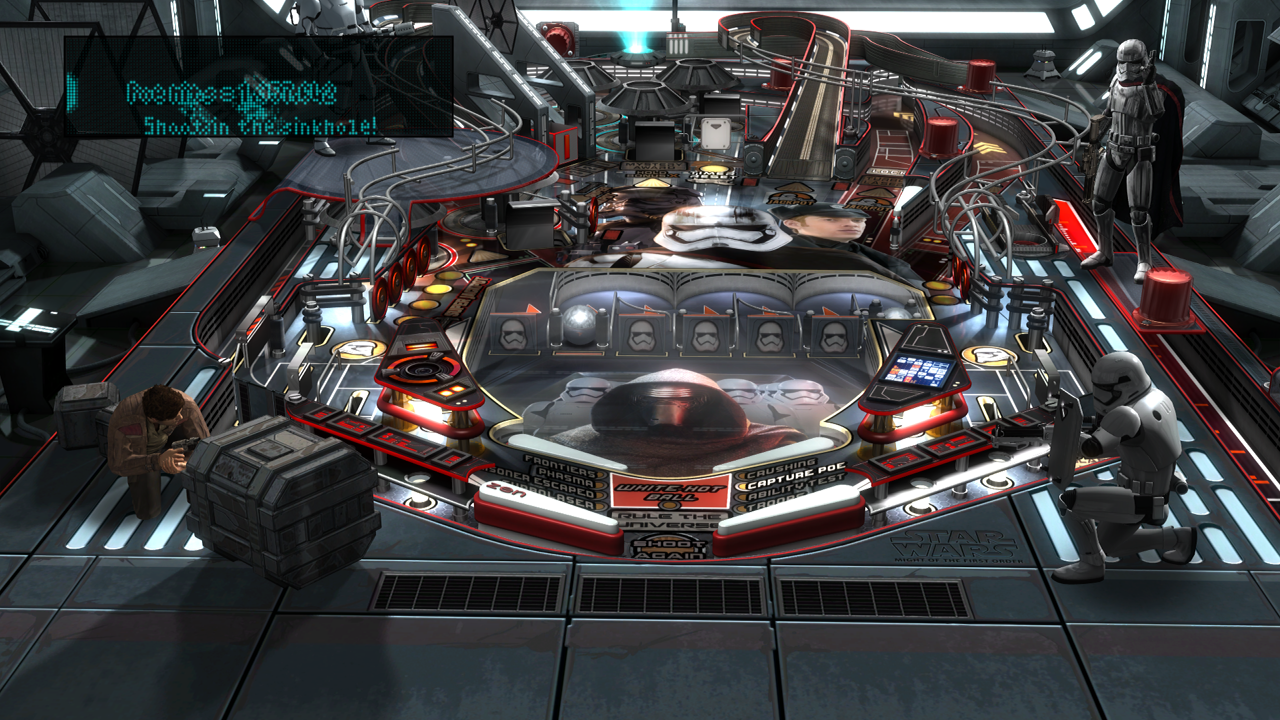 The skill shot was a lot less obvious as to how you accomplish it. It turns out that you need to just get the ball about halfway around the ramp after launching to just come in contact with the tractor beam to score 3,000,000, as shown below. The second skill shot is slightly further along the wraparound track where the flames are located. Hit that for 500,000. 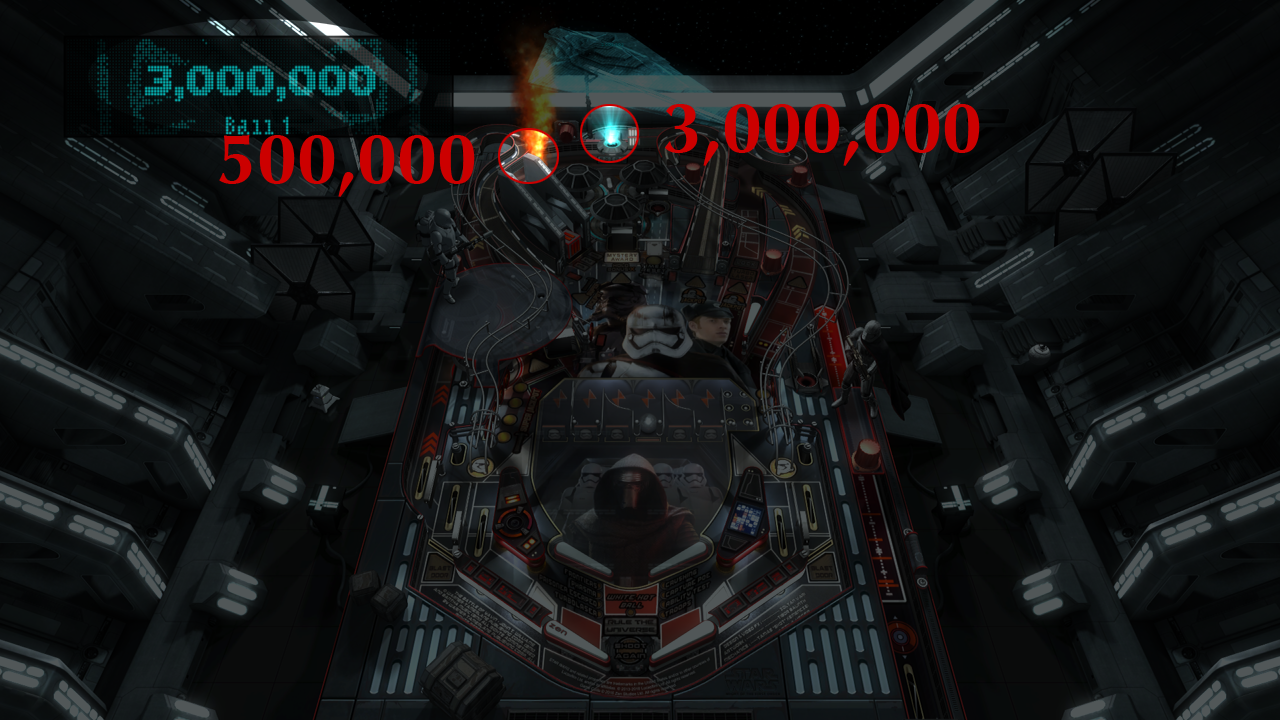 Again with the music! I know the existing film scores so well and which scenes the individual cues belong to, that the one chosen for this table feels completely out of place. It sounds way too heroic and hopeful when the subject matter is the polar opposite of that. Lucasfilm, please grant them rights to the new music for these tables! The music is from "The Battle of Yavin” from “A New Hope”.

The voices are interesting because I feel like Hux’s voice actually sounds more like Phasma, and Phasma's voice isn’t even close to Gwendolyn Christie’s. I realize the voices are a fairly minor part of the table content, but it can be a little distracting or cringe-worthy when the voices don’t sound even remotely close.  I guess if I had to choose where the attention to details goes, it would be with the graphics and gameplay.

Some things I liked:

When you delay launching the ball, Phasma and Hux both question why you haven’t done so. Phasma actually shoots her blaster at the floor to get your attention, which made me chuckle. 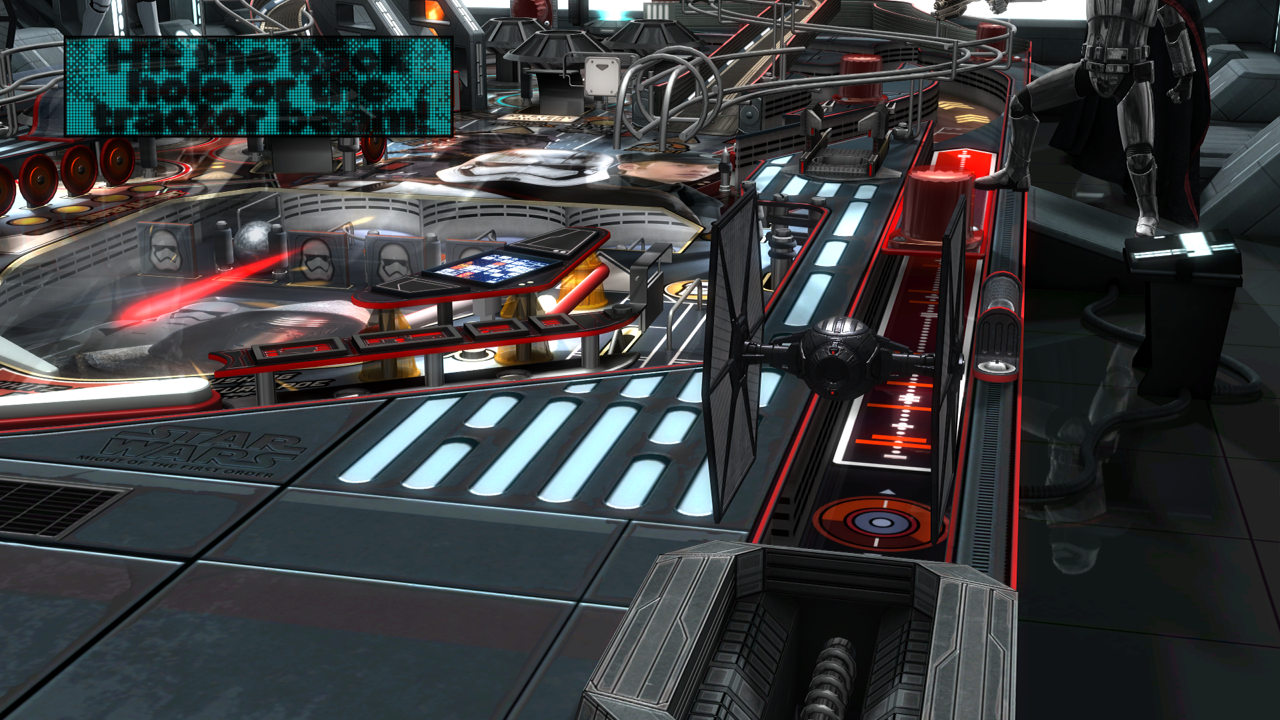 Compared to the Jakku table, the First Order table art made it easier to follow the ball around. There are also great environmental elements like: docked TIE fighters, small droids scurrying back and forth and a Star Destroyer hologram that overlays an inverted magnetic rail. I liked a how they represented locked balls as TIE fighters sitting in the angled dock (as shown in the film). This attention to detail tells me they care about what they’re building in these tables.The docked TIEs are shown just above and to the right of the Flame trooper. 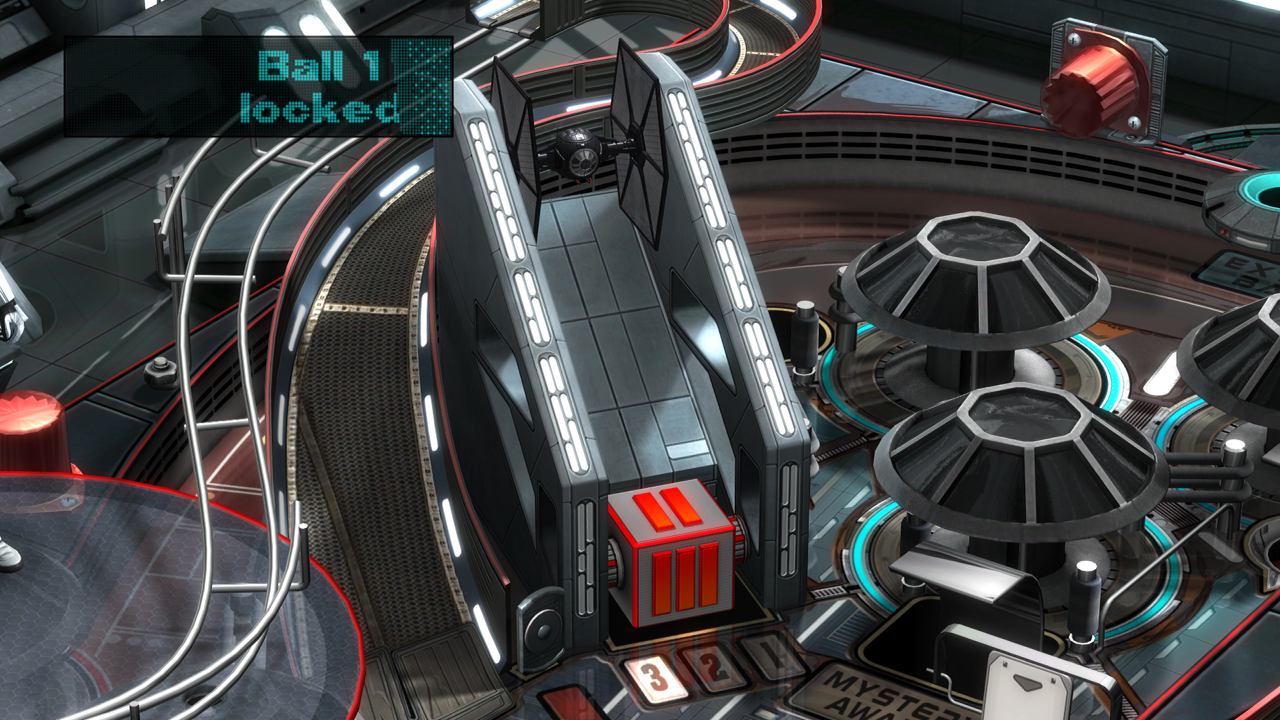 Speaking of flame troopers, he loves using that flamethrower! 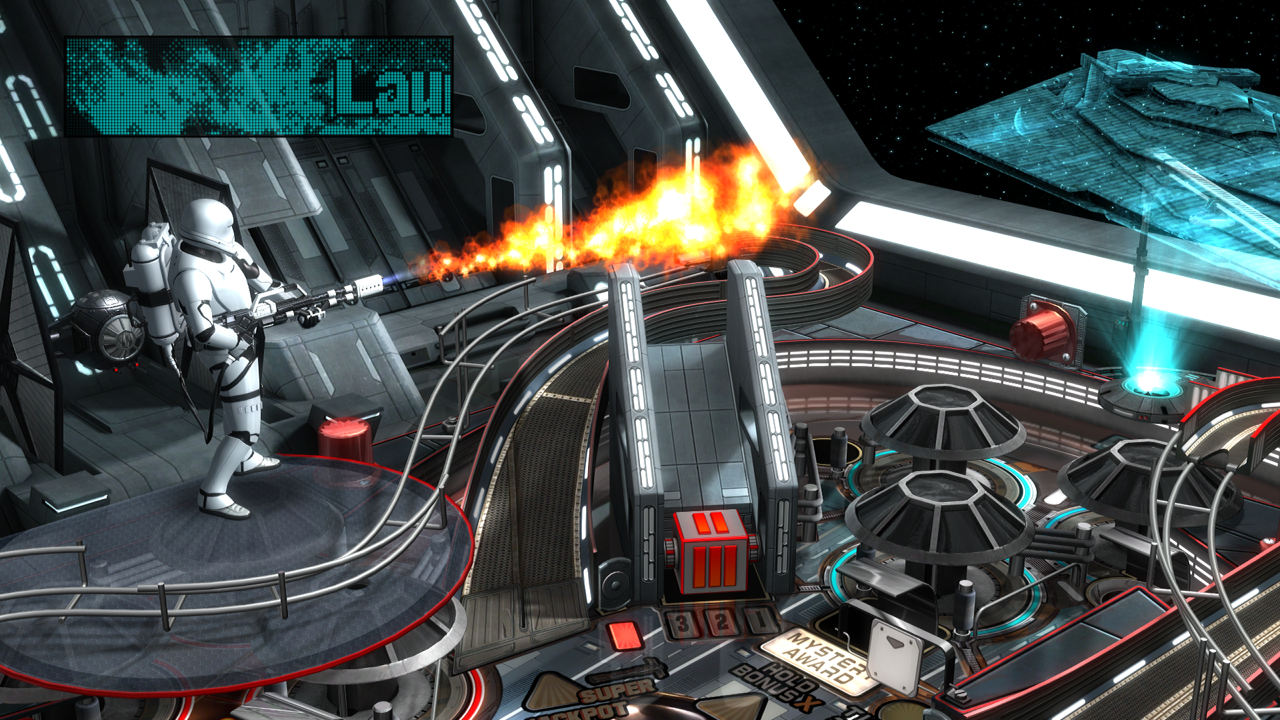 Orignally, I didn’t know how to activate secondary set of flippers that are “below the glass” of the main table with Kylo Ren on it. They activate once the first ball in there is "captured" by sending it through the access point pictured below. Subsequent balls are used to hit the original from below in order to move it across the slots to the far right slot. 3 locked balls = multi-ball mode. 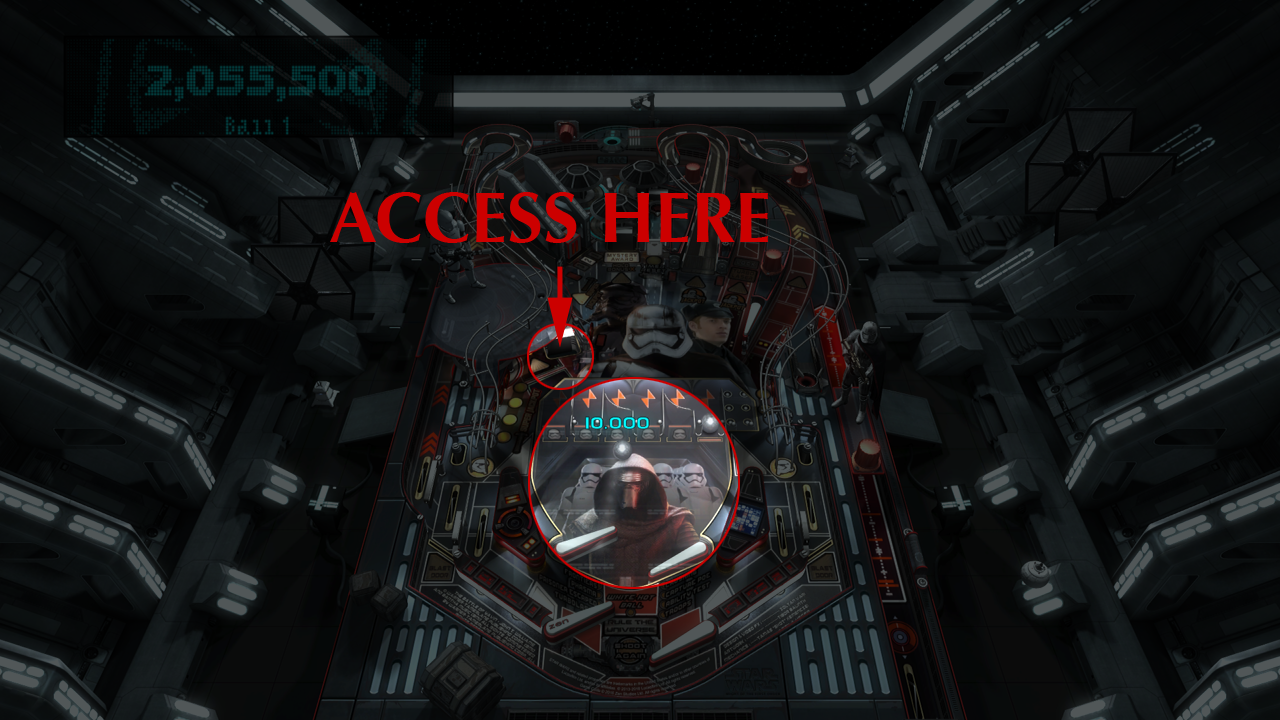 In general, I feel like I stayed “in play” much longer this table, scoring 25+ million within the first couple of hours of play. The openness of the main table gave me a little breathing room and it didn't feel like the ball is immediately thrown back at me because I missed the entrance to a ramp, like on the Force Awakens table. I’m looking forward to completing my training and discovering all the other modes this table has to offer.

All in all, these two tables are great additions to the other Star Wars tables I already own. I’m amazed that Zen Studios was able to keep the development of these under wraps until just before release, so bravo to them! For the cost, these games have great replay value because of the variety of modes and activities within each table. There are times where I want to play a quick couple of games before we head out for the evening, and these games are perfect for that scenario. I also love the split screen and the online head-to-head modes of play.

Both tables are very creative, highly detailed environments that captured the feel of the newest Star Wars film perfectly. The elements of the tables work really well together, and are nicely integrated with the sound effects and other audio cues. Zen Studios really knows how to put together some compelling tables that keep you coming back. Although the frustration level sometimes kicks in with some of the problems mentioned above, I’d give these a solid “must buy” if you’ve purchased their other Star Wars tables.