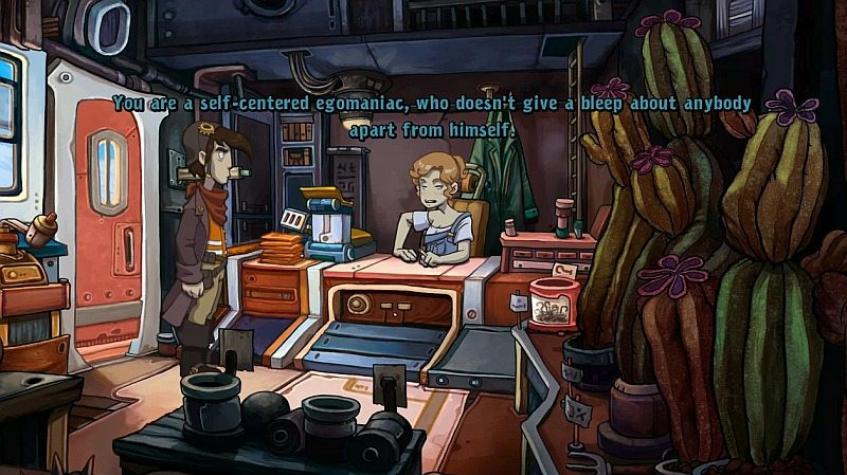 I haven’t had much time lately to write about video games but I have still been playing them.  I’ve had some half written adventure game reviews drafted for a while so decided to do a 2 part article.  First up here’s a few I’d recommend you avoid all for very different reasons: Deponia, Last Day of June, and Gold Rush! Anniversary.  And stay tuned later this month for a run down of a few I do in fact recommend.

It's rare that I meet an adventure game that I actively dislike.  Sometimes they are boring or the controls are bad but I just slog through and usually don’t review.  Deponia though I feel morally obligated to warn people about how bad it is. It wasn’t even the gameplay or common adventure game pitfalls. It was that the main character was such a misogynistic unlikeable jerk. I have a hard time understanding how this game was popular enough that they’ve made 3 more in the series. I guess maybe German humor doesn’t translate?

You play as Rufus dreaming of escaping the garbage dump town (which is what Deponia loosely translates to in German) you were born in. In town you have many friends and acquaintances who you will manipulate and treat like dirt throughout the game. Especially your former girlfriend who still lets you live in her house despite you constantly destroying her things and never doing any housework. There’s even one puzzle where you get to drug her and steal from her! Classy!

Later in the game you get another potential girlfriend who ends up the brunt of a bunch of fat jokes. Hence anyone think this a feminist soapbox,  it's not just the ladies you are terrible to. You flood your best friend’s basement so you can steal back a gift you gave him. And you blow up a bunch of townspeople’s houses so you can cut them in line to see the  mayor.

I get that adventure game characters do stupid crap for puzzles all the time but it's not usually malicious or it's at least handled more indirectly like swiping things no one is using and bringing them back later. In this game I kept waiting to get the gag when mean stuff happened but the punchline never came.

The Verdict: Don’t waste your money unless you like jerks and boredom.

I am a huge fan of British prog rock artist Steven Wilson so I was super excited to find out there was a video game based on and scored with his music.  Bonus points the art is based on artist Hajo Mueller’s characters from Drive Home off Wilson’s amazing concept album The Raven Who Refused to Sing. This is going to be awesome right?! Like playing one of his cinematic music videos?!

It did indeed feel a lot like inhabiting one of his music videos. Except it felt like you were trapped in a really repetitive one and couldn’t escape. It seems every choice you make is always wrong and leads you back where you started.  I kept expecting Bill Murray to make a cameo. The score and art are stunning.  There’s no actual voice acting but the characters sigh and talk gibberish so you can get the general gist of the emotion they are expressing. Which was cute at first but gets annoying hearing over and over again reliving days.

In the game you play as Carl married to the love of your life June (whose name I didn’t catch until much later and kept being annoyed it was set in what looked like the fall, yet the game said it was “June”). The game play centers around altering events to prevent a catastrophe. As a mechanic you relieve days where you learn new things and can alter the environment to change how events unfold before the fateful moment.

I get that the game is trying to take the player through feelings of anger, grief, love, loss, fear and other emotions and isn’t supposed to be “fun” per say. But it didn’t feel interesting and engrossing and instead quite repetitive. It’s beautiful but I didn’t really want to play it.

The Verdict: It’s sonically and visually compelling but just not interesting to play for more than 30 minutes.

Gold Rush! Anniversary edition is a remake adding only updated graphics and voice acting but not altering any game play. And what may have been amazing gameplay when you had to make things fit on a floppy disk, doesn’t really hold up well over 20 years later. I have fond memories of playing this game on an Apple IIGS as a child so was psyched to see it remastered in a steam sale. Now I’m starting to wonder if I was some sort of child savant and somehow never got trapped in dead end puzzles and frequent deaths.

You play as Jerrod Wilson who finally gets the letter he’s been waiting 11 years for to join his brother out west. And just in time for the goldrush. Yee-haw!  I’m rarely a quitter but this one gets the so bad I can’t even finish it distinction.

The Verdict: The Goldrush was a bust.