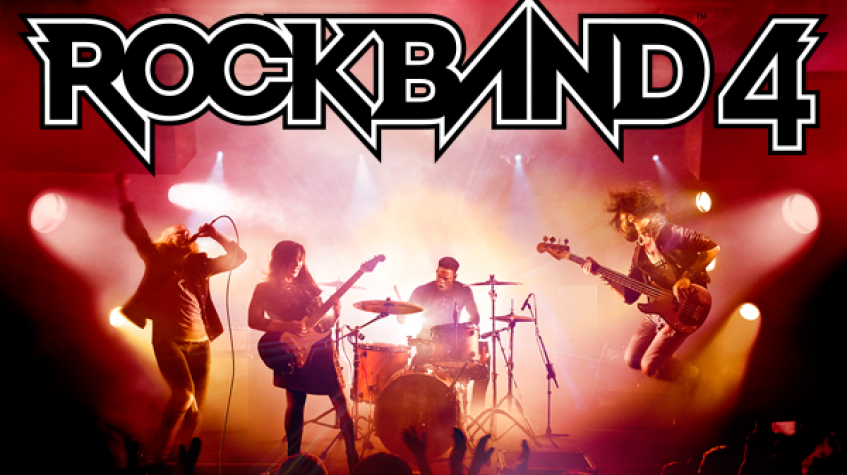 One of my all time favorite video games is back for the latest console generation! This is great because I still had my  PS3 hooked up to the main TV and need to swap around HDMI cables in the wire jungle behind our TV whenever I have a hankering to pick up my plastic bass and microphone. Since Harmonix is the best, it's extra excellent that not only can I play on PS4, but our old instruments and the majority of our DLC would also come over to the new system.

Kudos to Harmonix for making the majority of your older instruments compatible on the next gen consoles. It had been a while since we played so a few weeks before launch I did fire up RB3 to see what condition our instruments were in.  My guitars had mixed results in their hibernation under my coffee table.  I had two Rock Band style ones, one of which was fine other than needing new batteries and the other was basically useless.  Thankfully last PAX I pre-ordered the Penny Arcade guitar so we had a fully functional band at launch.

The new guitar is very similar to the old one, other than it now having PS4 style buttons. It's just different enough to be annoying in the menus though. Instead of Start and Select buttons now it’s Share and Options and I never remember which is actually select or enter now. I’m always fumbling around through the menus and accidently selecting things when I meant to go back and vice-versa.  I also have trouble remembering if the colors correspond to the guitar buttons or the Sony symbols in the on screen menus, especially when switching between singing and playing bass. I guess eventually I’ll lose the PS3 muscle memory. Additionally, the share button is in an annoying place that I often hit by accident when using the whammy bar. No, I did not want to pause in the middle of my solo and share this moment to Facebook!

The best thing about the new guitar is is there's no USB dongle required and it connects “automagically” via bluetooth. Of course all our old guitars, mics, and drum sets are wired so I need to remember to pick up a USB hub so I don't have to keep swapping things around and forgetting to plug back in the controllers to charge when I’m done playing.  I guess I’ll deal with those cons in favor of forward compatibility and not buying another slew of plastic instruments and file it under #firstworldproblems

Some of my old microphones didn’t fair well either with their cords all balled up inside a drawer, but thankfully I had some backups so I’ve got enough for harmonies.  If they come out with a wireless mic though hopefully Santa will bring me one!

Harmonix didn’t announce, until right around launch, any details on if the fancy Ion drum kit was still compatible. Thankfully, we are on the Playstation platform, so ours does indeed work other than it being wonky about signing into a PS4 account if you want to play online. You have to load the game and let the drummer sign in first, and sometimes if you are swapping around band members it will sign itself out.

PS4 doesn’t really know what to do with USB controllers versus wireless but at least they support them unlike XBone where you are SOL if you  had an Ion or any other wired instruments.  I guess you need a whole new dongle on XBone or something but can use the actual old instruments?  Can anyone confirm?

I was always a little sad Sony didn’t get as much RBN love as Microsoft did, but clearly ultimately it was the superior Rock Band platform!

If you had the Pro guitar or keys in RB3 you are also SOL on all platforms as those are no longer compatible with RB4. I had both but didn’t use either all that often so I don’t really miss them. Keytar solos were fun but there were so few songs that truly supported them. I’m still a little sad The Final Countdown was never ported for keys...

Being huge fans of the game we had amassed quite a lot of DLC and have well over 1000 songs. Thankfully about 90% of it should be forward compatible. There was a bonus perk  where they tried to make this even more awesome that  I saw on Twitter a few weeks before launch.  You were supposed to be able to start downloading your DLC a few days before the game shipped so everything would be ready on launch day.  That part, not so much…

I moved the PS4 into a room where I could plug in an ethernet cable instead of getting everything back over wireless. We tried to queue a bunch of the songs a few days before launch but the Sony store was too flaky and confused about if I could download content for a game we didn’t have so I gave up. I moved the PS4 back to the living room so I could play Zombie Vikings (which is awesome and some day if I have more free time I’ll do a review) and thankfully the wireless connection was fine for getting back the DLC once the Sony store stopped being a jerk.  It was definitely a PITA to have to queue each song individually, but I get that music licensing rules are dumb. We have most of our songs back, but there are still a handful that show as unavailable or want me to rebuy in the store.

They don’t yet have exports for any of the on disc games, but those will hopefully be made available in the coming months. Harmonix always has the best customer service, and is working through these issues pretty rapidly. Check out this thread on the forums if you are interested in details of what might not be working yet.  They also seem to have started adding new DLC weekly again for even more songs!

Enough about all my accessories and DLC, how is the actual new game?!

It was pretty easy to jump right into the game from the main menu.  There were plenty of pre-canned characters to choose from so we fired up quick play to brush off the cobwebs. Some of my favorites of the default characters are Barnabus Mudflaps and Irene the Cat Lady.

The first few songs I was definitely rusty, but after two or three I was right back into the swing of things. I feel like the note mapping on bass is a lot more natural, even playing on medium, and I can get a rhythm of what’s coming next rather than just watching for the gems more than any of the past games.  Usually you had to be playing on Hard or Expert for that.

When we tried to recreate our awesome band Frog Monkey the character creator seems to have a lot less options than in the past. Although that’s not necessarily a bad thing since it didn’t take too long to recreate our characters. My one complaint is one thing you can’t control anymore is the character’s weight. And I feel like our entire band could use a sandwich but I guess life is hard on the road…

There aren’t as many clothing options as older games, and I still miss my Masshole shirt from RB1 (which incidentally I was finally able to recreate on the internet 8 years later and now own in real life!). There are some great item descriptions in there though for the wrap skirt
And by “great”  I only mean that if you are a fan of terrible puns!

The menus and loading of the DLC is a lot snappier than the old games.  With so many songs we used to have to fire the game up and go and get a drink and come back in 5 minutes before we’d be ready to play. RB3 also crashed on us at least once a session and I haven’t seen RB4 crash at all in the month or so I’ve had it. Now it feels like you can just jump right in and get started.  Not only that; the real surprise is store actually seems to be functional 90%  of the time and downloads are quick. When did Sony actually figure out how to shut up and take my $?!

The internetz like to argue over things like which Rock Band game has the best sound track. This I don’t understand because I’m fairly certain it's a scientific fact that Rock Band 1 had the best soundtrack and everything else was garbage! :p

In true get off my lawn form I kinda feel like each one gets worse (mostly since I have all the other songs I want as DLC) though this one may beat RB3.  It does feature some new to the franchise big name artists like U2 and mega hits like Van Morrison’s Brown Eyed Girl. But I think my personal favs are the addition of the Protomen and old Harmonix band favs like Tijuana Sweetheart.  I’m also psyched for some new to me artists whose albums I want to pick up: Soul Remnants and Arctic Monkeys. Wikipedia has the full list of tracks

Life is Hard on the Road

The tour mode is a mix of all the best parts of the previous games. You progress through cities that get further away as venues get larger and larger.  There are also choices you have to make along the way that influence if you end up with more fans, more money, or cool outfits. Harmonix did an excellent job of making it feel like a story. One of my favorites so far (SPOILER ALERT)  was when we decided to crash on fans floors to save money the band ended up with head lice according to the story prompts. Funny enough in the text descriptions but then at our next gig I thought there was a bug because all the characters were bald.  And then my brain caught up and realized they shaved all our heads CUZ LICE!  We finished our first World Tour and I'm looking forward to doing another one to adding more cities or starting over and making different choices to see how the story unfolds!

Google image search creep factor goes past 11 since I have no idea whose band this is but it was the first hit and the band name is my maiden name...

There’s another fun element in tour mode that makes you vote on songs. Inevitably songs I love to sing usually make my husband’s arms fall off on drums so it's fun to argue over that directly in the game. When there’s only two of us random gets to pick (and it always picks me mwahahahahaha!) but when I’m the double threat of bass and singing clearly I win!  He just needs to learn how to Phil Collins! :p They also have encores and voting on changing set lists midway to take fan requests.  Bonus points for adding in achievements/trophies both for pandering to your fans and telling them screw you we ain’t playing Freebird! :p

Screw third time's a charm. Harmonix and Mad Catz definitely nailed it with 4! All in all an excellent return for the franchise on the next generation of consoles. My hardware is compatible and my songs didn’t disappear! I’m looking forward to spending many hours playing fake bass and completing Frog Monkey’s comeback world tour!