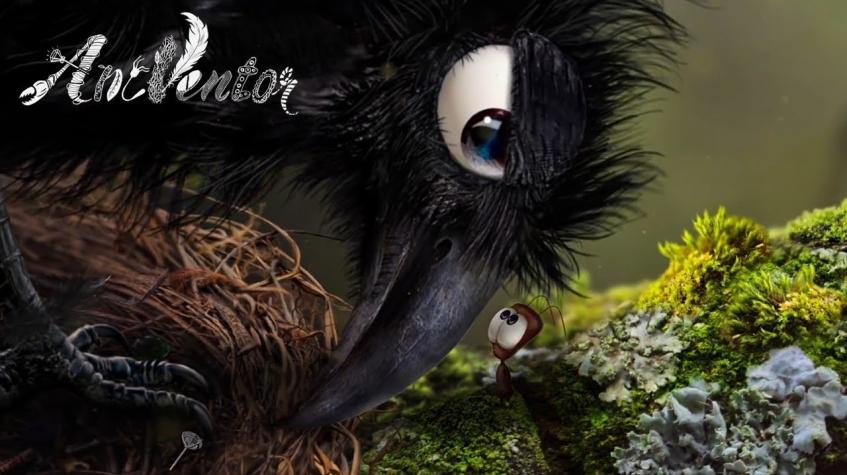 I saw this in the PAX Rising Booth at PAX East this year and have been looking forward to checking it out.  It's an episodic point-and-click adventure game from Ukrainian indie studio LoopyMood. They’re a four person team and this is their first game. They’ve already won several awards for storytelling and art.

AntVentor has released the first episode in a series of three.  You play as ant inventor Florantine whose dream is to gain his wings and travel the world.  There’s no dialog but the sound effects and character expressions pick up the story telling slack. Hmm i guess if he doesn’t talk that makes him a mute-ant!

I am usually not a fan of point-and-click adventures without dialog but this one does an amazing of job of having the characters be so expressive that I didn’t miss it all.  The indie team spent a lot of time making sure of that:

We spent two years designing locations, characters and their emotions. The main character, Florantine, has 57 different emotions through which he communicates with a player and shows his attitude.

His attitude is quirky and curious and he’s got no time for the you the bumbling player who accidentally destroys his invention in the first scene.

The art in this game is gorgeous. In addition to cute expressive characters the environment is a photo realistic look at nature from the perspective of an ant.  You’ll explore the underground as well as climb some trees. The sound is also top notch. None of the characters speak but the crows caw and Florantine makes some expressive ant noises. The background and music in puzzles works well and keeps you immersed.

Here’s a few examples of the awesome art. You really do feel like you’re walking around in the outside world as an ant!

The story is excellent and keeps you wanting to play. But there are definitely some rookie mistakes in the puzzles and visibility of where you can move from screen to screen.

I had a lot of moments where I knew what I needed to do but wasn’t quite clicking on the right spot. In the first room for instance I knew I needed to get up the ladder but it took a while to figure out what to click to be able to climb. The adventure game staple of being able to see the actionable stuff and get a description of what it was could have helped avoid pixel hunting and confusion.

There is a visual hint system to try to help with the clicking confusion but it was often item + item=result. I had already figured that part out, just not how to actually combine them with clicks. It felt a little like the underpants gnomes from South Park: Step 3 Profit!

There were also few spots where it wasn’t all obvious that you could climb up or down in one specific spot click and open up a new area. And I do hate puzzles that use the trope of drugging characters to achieve your goal so minus points for that too.

There were some interesting puzzles and characters to encounter like the dancing spider and creepy caterpillar lady. Those helped keep things interesting and fun.

We played through the game in about 3 hours.  Probably could have done more like 2 without all the pixel and location exit hunting. I enjoyed playing though and hope LoopyMood will fix some of the annoying stuff in the future episodes.  I definitely recommend checking it out and am looking forward to the future installments!